In his evidence at the trial of former Bosnian Serb police officials, Radulovic, who served as inspector in the Republika Srpska state security service, claims the prison guards shot prisoners from the roof of the administration building in the Omarska prison camp, betting each other a beer that they would hit them in the specific spot 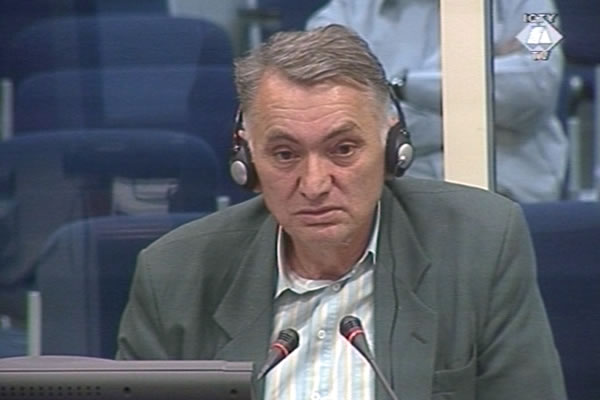 Predrag Radulovic, witness at the Mico Stanisic and Stojan Zupljanin trial
Continuing his evidence at the trial of the former Bosnian Serb police officials, Radulovic, former inspector of the state security service in the Banja Luka Security Services Center spoke about the crimes committed by the special police unit, the terror campaign in the ‘red van’ in Banja Luka and the abuse non-Serbs suffered in the Omarska and Keraterm prison camps in 1992. Mico Stanisic, the first Bosnian Serb interior minister, and Stojan Zupljanin, chief of the Banja Luka Security Services Center, are charged with crimes in 20 BH municipalities; Banja Luka is one of them.

Radulovic said that the special police unit from Banja Luka looted, beat, detained and killed Croats and Bosniaks in Doboj. Radulovic reported this to Zupljanin both in writing and orally; Zupljanin was ‘surprised’. As the specials were withdrawn from Doboj two days later, the witness concluded that Zupljanin had official authority over the formation.

When he visited a public security station in Doboj, a senior police officer told him that ‘the hatters’ ganged up with the local criminals to rape a 13-year old Bosniak girl in front of her mother. Members of the special unit from Banja Luka were called ‘hatters’ because of the hats they wore. Radulovic complained to the local chief Andrija Belosevic, who told Radulovic he couldn’t do anything because the special police and the paramilitaries had a lot of political support. The witness also said that the special police unit behaved in the same way in Kotor Varos, Prijedor and Sanski Most where they were sent after withdrawing from Doboj.

Radulovic also described the ‘terror campaign’ by the Red Van group – police officers who cruised the town in a red van – in Banja Luka throughout 1992. Radulovic called it ‘the death van in which people were brought to heel’. Eminent and rich non-Serbs were tortured and beaten in that van ‘in order to spread fear and force others to flee the town’. The group’s HQ was in the Security Services Center. Radulovic insisted that some members were still at large in Banja Luka.

The witness also spoke about his visit to the prison camps in Keraterm and Omarska a month after they were established. According to him, the conditions in the Keraterm prison camp were ‘unbearable’. In one of the buildings he saw about a thousand persons; there was not enough room for them to sit. They had to stand up as ‘sheaves’, without any water or basic hygiene, and were beaten up when they were taken to be interrogated. The guards were members of the reserve and active police force, the witness claimed.

Radulovic contends that his group of operatives working for the state security service reported all those crimes to the authorities in reports they signed with the pseudonym Milos. The prosecution has 1,200 pages of those reports; the witness claims that there are at least 2,750 pages, but has no idea what happened to them after he was ‘expelled’ from the state security service for ‘spreading brotherhood and unity in Republika Srpska’.