DESTROYING ALL TRACES OF MOSQUES AND CHURCHES

Andras Riedlmayer, the prosecution’s expert for cultural heritage in the Balkans, testified about the destruction of Catholic churches and mosques in 14 BH municipalities listed in the indictment against Mico Stanisic and Stojan Zupljanin. The level of destruction of religious buildings varied: some were torn down, and in some cases every trace of their existence was destroyed. Even their foundations were dug out and removed, Riedlmayer said 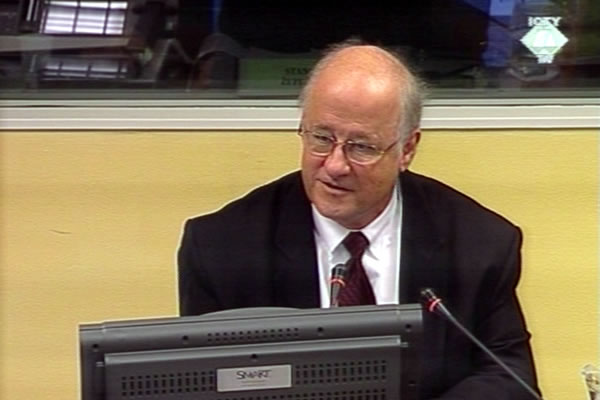 Andras Riedlmayer, witness at the Mico Stanisic and Stojan Zupljanin trial
At the trial of Mico Stanisic and Stojan Zupljanin, the court heard evidence of US expert for Islamic heritage in the Balkans, Andras Riedlmayer, who spoke about the destruction of Muslim and Catholic places of worship in 14 BH municipalities listed in the indictment against the former Bosnian Serb police officials. Riedlmayer has already testified about the destruction of religious and cultural monuments in the war in the former Yugoslavia at several trials for crimes in Bosnia and Herzegovina and Kosovo.

In 2002, Riedlmayer drafted an expert report for the trial of Slobodan Milosevic, entitled Destruction of cultural heritage in Bosnia Herzegovina 1992 – 1996, a post-war survey of selected municipalities. Riedlmayer later amended the report for his testimony in other cases. Last year Riedlmayer visited the municipalities of Bileca, Gacko, Teslic and Vlasenica, in relation to the Stanisic and Zupljanin trial. Riedlmayer included his findings about the destruction in these municipalities in his report.

In a brief examination-in chief, the prosecutor showed Riedlmayer photos of destroyed places of worship in a number of places: Catholic churches and mosques destroyed to various degrees in the municipalities of Kljuc, Kotor Varos, Prijedor, Zvornik, Brcko, Visegrad and Bosanski Samac. One photo showed an empty space where the Sava Mosque in Brcko used to be. As the witness explained, in that case, first the rubble was cleared and then the very foundations of the mosque were dug out and removed.

[IMAGE]4781[/IMAGE]The defense of the first Republika Srpska interior minister Mico Stanisic noted that the witness was not a military expert and could not talk about the way in which buildings were destroyed or the perpetrators. The defense lawyer claimed that Riedlmayer didn’t list the correct dates for the destruction of the places of worship in some municipalities, and that some of the mosques and churches were destroyed after 1992, outside of the scope of the indictment. The witness agreed that there could have been errors because he had visited more than 400 sites.

Igor Pantelic, Stojan Zupljanin’s counsel, contested the witness’s objectivity, noting that Bosnia and Herzegovina hired Riedlmayer in its case against Serbia before the International Court of Justice. Partiality of Riedlmayer’s research, Pantelic said, was evidenced by the fact that Riedlmayer never spoke to anyone from Republika Srpska while preparing his report. The witness replied that the investigation was conducted in the field; he got most of the information from local religious communities to whom the destroyed buildings belonged. As for the Republika Srpska institutions, Riedlmayer got cadastral data on those buildings from them.

The trial of Mico Stanisic and Stojan Zupljanin continues on Monday, 7 June 2010. The prosecution will call its next witness.