BIAS OR REFLECTION OF REALITY?

Stojan Zupljanin’s defense contests the credibility of Ian Traynor, war reporter for the newspaper Guardian, claiming that he ‘lacks objectivity and is biased against Serbs’. Traynor replied that his articles ‘reflect the reality in the field’: the fact that the Serb forces were stronger, controlled two thirds of the BH territory, besieged Sarajevo and ethnically cleansed Eastern Bosnia 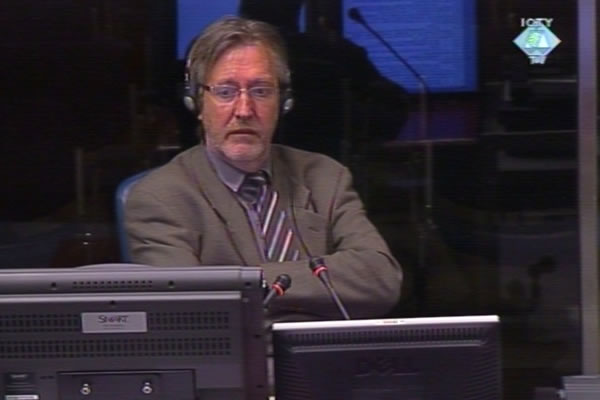 In his effort to contest the witness’s credibility, lawyer Igor Pantelic suggested that Traynor was less than objective in his report from Kozarac because he didn’t talk to the VRS commanders. The indictment alleges that many civilians were killed in Kozarac and nearby places in May and June 1992. The witness noted that in his story he quoted from statements he took from the refugees from Kozarac and international officials. When he came to Kozarac, the Serb army arrested him. The defense counsel then tried to prove that the destruction in the town could have been the result of ‘a legitimate military operation’. The witness wondered aloud how random shelling and the expulsion of 15,000 civilians could be seen as a legitimate military operation.

The defense counsel also noted that the witness in his ‘biased articles’ concluded that the ‘Serb side is the main culprit for all the crimes in the war’. Traynor rejected this claim, arguing that his articles only ‘reflected the reality in the field’: the Serb forces were superior and between April and November 1992, they were able to establish control over two thirds of the BH territory. Also, the Serb forces besieged Sarajevo and ethnically cleansed Eastern Bosnia.

The judges asked Pantelic several times about what he wanted to achieve with his examination. In the end, the judges told the witness not to respond to the claims the defense lawyer made in order to challenge his objectivity and credibility.

Pantelic referred to the notes Traynor took during his interview with Stojan Zupljanin in late September 1992 in Banja Luka. In his examination-in chief, the witness claimed that Zupljanin told him that the mass departure of non-Serbs was not ‘ethnic cleansing’ but ‘economic emigration’. They left because European countries offered them ‘hotel rooms and well-paid jobs’, Stanisic added. The defense counsel today argued Zupljanin’s claim was accurate, saying that many displaced persons never returned to BH even after the war was over. Traynor repeated that in his view the economic emigration theory was ‘entirely inappropriate’, adding that he was not a sociologist to analyze the reasons why so many of the refugees decided not to return to BH.

The next witness at the trial of Mico Stanisic and Stojan Zupljanin is Branko Peric, a judge of the BH State Court.