THREE MONTHS IN PRISON FOR FALSE EVIDENCE AND BRIBING WITNESSES

Zuhdija Tabakovic was convicted today of contempt of court and sentenced to three months in prison. Last Friday Tabakovic made a plea agreement with the prosecution to plead guilty to three counts in the indictment charging him with giving false evidence and bribing witnesses in the Milan Lukic case 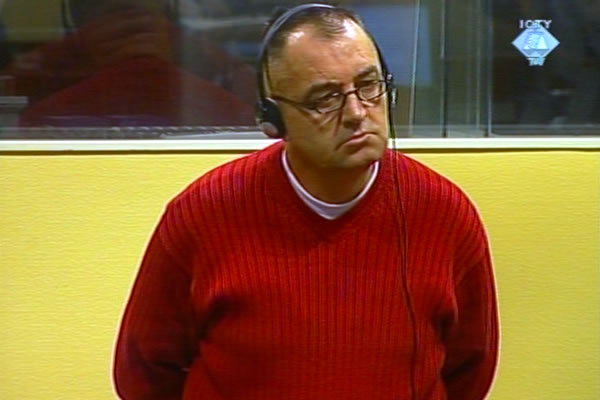 Zuhdija Tabakovic in the courtroom
The Trial Chamber with Australian judge Parker presiding today sentenced Zuhdija Tabakovic to three months in prison for contempt of court: he was charged with signing a false statement and bribing witnesses in the Milan and Sredoje Lukic case.

The presiding judge asked Tabakovic a series of questions to verify that his guilty plea was voluntarily, informed and unequivocal, with adequate factual basis to confirm it, the standard for the acceptance of plea agreements at the Tribunal.

Presenting the factual basis of the agreement, the prosecutor said that Tabakovic had signed a pre-written statement Jelena Rasic, Milan Lukic’s case manager, gave him in October 2008. Rasic paid Tabakovic €1,000 for the statement in which Tabakovic said he had witnessed the execution of a group of Bosniaks on the Drina river bank near Visegrad on 7 June 1992. Milan Lukic was not among perpetrators, Tabakovic contended. Jelena Rasic promised to give him another €1,500, as well as clothes, shoes, and an all expenses paid trip if he agreed to confirm his statement in a testimony before the Tribunal.

At Rasic’s request, Tabakovic then found two other witnesses, today designated as X and Y. They too signed false statements. Tabakovic met the defense team several times. On one occasion, Tabakovic went through the details of the false statement with a lawyer, and ‘clearly told’ the man he didn’t know Milan Lukic.

In late December 2008, Tabakovic contacted the OTP office in Sarajevo and asked for €2,500 in exchange for the story on false statements. Tabakovic’s proposal was dismissed. Some days later Tabakovic returned: he admitted what he had done for free and gave the prosecutors his signed false statement. In the following nine months, Tabakovic met with the prosecution eight times. All the interviews were recorded on video and Tabakovic regularly reported the details of his meetings with the defense. After the presentation of the facts, the prosecutor called for a sentence between four and six months in prison.

Tabakovic’s defense counsel Steven Powels noted in mitigation that the accused had had contacts with the prosecution, and had thus prevented false evidence from appearing before the court; this would have seriously jeopardized the trial. The defense lawyer also noted that members of the defense team who actually masterminded the plot and the other two false witnesses had not been prosecuted. The presiding judge indicated today there could be more contempt of court trials related to this case.

Tabakovic has been detained in the UN Detention Unit since 18 December 2009 and has thus already served his sentence. He will be released when all the necessary formalities are done.