Prosecution witness giving evidence under the pseudonym ST 172 drafted daily reports from the Manjaca camp. In his reports, he told his superiors that ‘prisoners are dying of thirst’ and were subjected to ‘abuse and humiliation’. The witness wanted the military police to be alerted to the fact that ‘Manjaca is not a house of terror’ but ‘a camp for prisoners of war who should be treated humanely’ 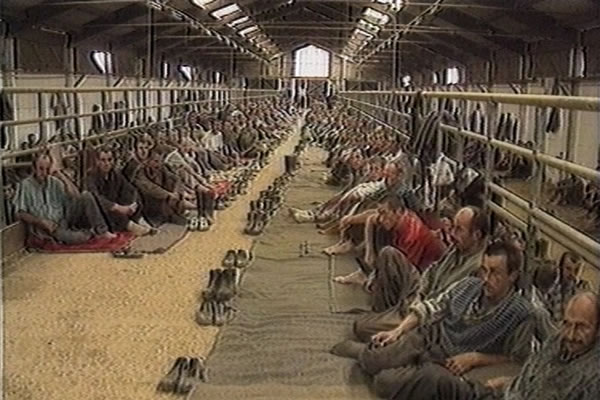 Concetracion camp Manjaca
The trial of former Bosnian Serb police officials Mico Stanisic and Stojan Zupljanin continues with the evidence of a protected witness testifying under the pseudonym ST 172. In 1992, the witness, a Bosnian Serb, had a job in the Manjaca prison camp near Banja Luka. The exact nature of his post remained undisclosed to the public.

In his examination-in chief, the witness said that the Karadjordjevo farm was given a new purpose in 1991. The farm stables and hangars served as a prison camp for the prisoners of war from Croatia. In June 1992, Bozidar Popovic, a retired JNA officer who went back to active military service in the VRS, was appointed commander of the prison camp.

According to the witness, the military police and the policemen from the stations in Kljuc and Sanski Most were in charge of security in the prison camp. Police officers were involved in securing the camp on the orders of the Krajina Corps command after an arrangement was agreed on with the Public Security Centre in Banja Luka, the witness explained. After their arrival in the camp, civilian personnel were subordinated to the military bodies. If they would commit crimes, they would have been tried for their crimes by military tribunals. The witness contends that the information about their crimes would have been forwarded to the chiefs of relevant police stations.

[IMAGE]4522[/IMAGE]Prisoners were brought to the camp by police officers, the witness recounted, adding that often they had no personal documents. According to the reports the witness had sent on a more or less daily basis to his superior officers, among the prisoners there were persons younger than 18 and older than 60 years of age. Also, some prisoners had serious injuries. The prosecution tendered those reports into evidence. In his reports, the witness asks his superiors to set free those men as ‘they are not fit for military service’. They were brought in ‘indiscriminately, taken from their houses and their fields’; they had ‘not been under arms or taken part in the armed rebellion’. The witness told his superiors, ‘those prisoners, who are human beings after all, are dying of thirst and are subjected to abuse and humiliation’. The witness urged them to ‘stop massive and unorganized detention of people who do not deserve it’. The witness also wanted the military police to be alerted to the fact that ‘Manjaca was not a house of terror’ but a ‘prison camp for prisoners of war who should be treated humanely’.

According to a report the witness drafted on 7 July 1992, 560 prisoners were brought to Manjaca from Sanski Most. Twenty four of them died in transport ‘most likely because there wasn’t enough air’. The witness said today he was ‘appalled as a human being’ because men ‘had to stand up like matches in trailer trucks with no air’. Many of them were elderly and had health problems. As the witness put it, the police treated those men ‘inhumanely and unprofessionally’.

The defense of Stanisic and Zupljanin will examine the witness tomorrow.