WITNESS ‘NOT SURE’ OF HIS OWN MEMORY

Yesterday Ned Krajisnik confirmed that Ratko Mladic and Milan Gvero talked about ‘liberating Srebrenica’ in the presence of General Momcilo Perisic on 18 July 1995 in the VRS Main Staff resort. Today Krajisnik said he was ‘not sure’ of his own memory 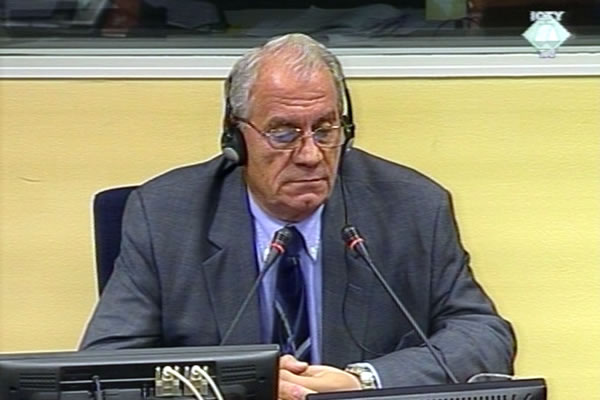 Ned Krajišnik, svjedok na suđenju Momčilu Perišiću
Ned Krajisnik, one of the founders of the Canadian humanitarian organization Republika Srpska is testifying for the prosecution at the trial of General Momcilo Perisic. In his examination-in-chief he confirmed that the former Chief of the VJ General Staff was near the VRS Main Staff on 18 July 1995, a week after Mladic’s troops entered Srebrenica. Perisic was photographed several times sitting at a table with Ratko Mladic, Ned Krajisnik and other guests from Canada in Crna Rijeka near Han Pijesak.

Because Krajisnik couldn’t remember at all what they had talked about on 18 of July 1995, yesterday the prosecutor showed him the statements he gave to the OTP two months ago, where he said that Mladic and Gvero had talked about ‘liberating Srebrenica’ in front of Perisic. General Perisic is on trial for contributing to the crimes the VRS committed in Srebrenica by providing, as the Chief of the VJ General Staff, logistic, personnel and material support to Mladic’s forces.

In the cross-examination, General Perisic’s defense counsel showed the witness proofing notes. The proofing session with the prosecution was held some days ago. In the notes, Krajisnik says he ‘is not sure if the conversation about Srebrenica was held in the resort or in the office’. This is contrary to what he had said in his September statement and in the audio recording of the interview with the OTP in August. The witness then confirmed that he didn’t remember if anybody talked about the events in Srebrenica during their stay in the resort, adding that his ‘memory is generally very weak’.

In the re-examination, the prosecution tried to establish what the witness could remember with some accuracy about 17 and 18 August 1995 and why yesterday he maintained that Srebrenica was discussed in Perisic’s presence only to change his mind today. Krajisnik stubbornly repeated that he was ‘not sure’ of his memory because in the period between his first statement to the OTP in August 2009 and today he had been shown ‘various video clips and photos’. He found them "confusing" as are the questions posed by the counsel.

As his evidence drew to a close, Krajisnik said that the Western media reports about the executions of men and boys in Srebrenica were ‘biased’. As he said, ‘I believe that the Serbs killed by Naser Oric’s troops are buried in the mass graves’, and then went on to say that he ‘had never heard of Srebrenica until it was liberated’. On the road from Belgrade to Han Pijesak on 17 July 1995 the witness ‘didn’t notice any signs of combat, any gunfire or people under stress’. Everything, the witness pointed, ‘was the same as before’.