Pyres Tucker, British Army colonel, believes that when the UN helicopters landed in Srebrenica to pick up the wounded, the fire that was opened on them came from positions ‘north of the river Drina, from Serbia’. The barrels on VJ cannons along the right bank of the river Drina were trained on Tuzla, he contends 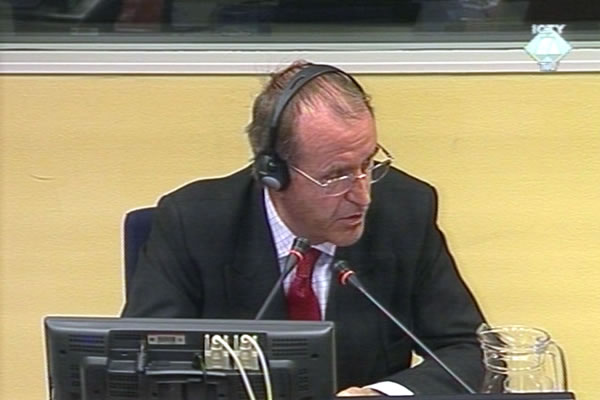 Pyers Tucker, svjedok na suđenju Momčilu Perišiću
As the examination-in chief of British colonel Pyres Tucker drew to its close, the prosecution tried to prove that in 1992 and 1993 there was ample media coverage of the situation in the Srebrenica enclave and related events. At that time, Tucker was a staff officer attached to the UNPROFOR commander, French general Philippe Morillon.

Through Tucker, the prosecution is trying to prove that, when General Perisic took over as the Chief of the VJ General Staff in August 1993, he did have the information about his subordinates’ crimes in BH.

As Tucker put it, thanks to the international pressure and General Morillon’s intervention in March 1993, Bosnian Serbs let two humanitarian convoys enter the Srebrenica enclave. The people of Srebrenica were ‘hopeless, stripped of their basic human dignity, without any hygiene, their eyes bleak’, Tucker recounted.

General Morillon, Tucker recounted, organized the evacuation of the wounded from the Srebrenica hospital using UN helicopters. When the helicopters landed, artillery fire was opened on them. On the basis of the craters, Tucker concluded that shells were fired from a large-caliber cannon positioned ‘north of the river Drina, in Serbia’. The witness contends that Bosnian Serbs didn’t have such artillery; the shell could only have come from the ‘Serbian Army command in Belgrade’, Tucker believes. He mentioned another incident when UN military observers located in a hotel on the right bank of the river Drina, in Serbia, reported that they ‘regularly saw cannons on the Serbian side, their barrels trained on Tuzla’.

In his cross-examination Tucker said that the BH Army had tried to ‘pull the UNPROFOR troops into a confrontation with the Serbs’. By way of an example, the witness described an incident in a Sarajevo hospital: a British sergeant was delivering fuel there and he saw mortars stationed around it. In Tucker’s words, the BH Army fired a shell from the hospital compound and called a press conference. The Serbs immediately returned fire, firing a shell on the hospital while the press conference was still underway, Tucker noted.

The defense counsel quoted from Tucker’s evidence at the trial of Stanislav Galic. The witness then agreed with the presiding judge that ‘some elements among the Bosnian Muslims exploited the misery of their own people’. Tucker confirmed that ‘there were those who believed that they could get back the territory that had been lost either through international intervention or by buying weapons’. Since it was impossible to get weapons, they decided to draw the media attention. ‘It was not in their interest to improve the fate of the civilians’, Tucker concluded. The cross-examination of Pyres Tucker continues tomorrow.