General Perisic’s defence counsel has implied in his cross-examination of Muhamed Sacirbegovic, former BH ambassador to the UN, that the BH Army used ‘protected areas for training and arming its troops which then targeted Bosnian Serbs’ in order to get ‘a response’ 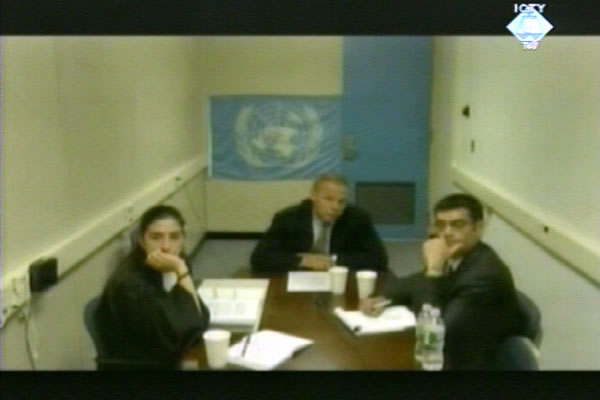 Muhamed Šaćirbegović svjedoči video linkom na suđenju Momčilu Perišiću
The defense counsel of Momcilo Perisic, former chief of the VJ General Staff continued his cross-examination of former BH ambassador to the UN Muhamed Sacirbegovic. Today he focused on the issue of protected zones established by Resolutions 824 and 836 of the UN Security Council. The prosecution tendered the resolutions into evidence as part of a series of UN documents in the examination-in-chief to show that General Perisic was informed about the events in BH.

The defense counsel showed a document stating that the UNPROFOR commanders, French general Philippe Morillon and Swedish general Erik Wahlgren, had ‘little idea how to proceed with safe areas resolutions’. General Wahlgren, the document went on to say, ‘prophetically warned the UN political authorities that if one allowed no controls of the military and paramilitary units of the Bosnian government, one would create a scenario which would encourage the use of safe areas as heavens where forces could refit, rearm, train and prepare for further military operations".

Sacirbegovic agreed that at that time he though that ‘protected zones should not have been demilitarized because BH had the right to defend those areas’. The BH mission to the UN felt that the ‘concept of protected zones left a hole in the rest of the country’, Sacirbegovic explained. According to Sacirbegovic, the question was if that meant the rest of the country was ‘an unprotected zone with civilians exposed to military risk’. BH didn’t get ‘necessary guarantees as to what measures would be taken to protect the population’, the witness said. In the end, General Wahlgren’s prophetic observation came true, Sacirbegovic said, because ‘Srebrenica was not defended…by either the UN or NATO’.

Muhamed Sacirbegovic’s evidence has now been put on hold for two weeks. The video link with the UN in New York where the witness is will be re-established on 13 July 2009.