PRLIC’S DEFENSE: IZETBEGOVIC AND THE BH ARMY ARE CRIMINALS

According to Jadranko Prlic’s lawyer, General Slobodan Praljak has been ‘too generous’ when he has described former Bosnian president Alija Izetbegovic in his examination-in chief as a ‘gentleman’, but also as a ‘shameless liar’ who ‘constantly changed his mind’. According to Prlic’s defense, Izetbegovic and the BH Army – and not the accused Herceg Bosna leaders – were members of a joint criminal enterprise 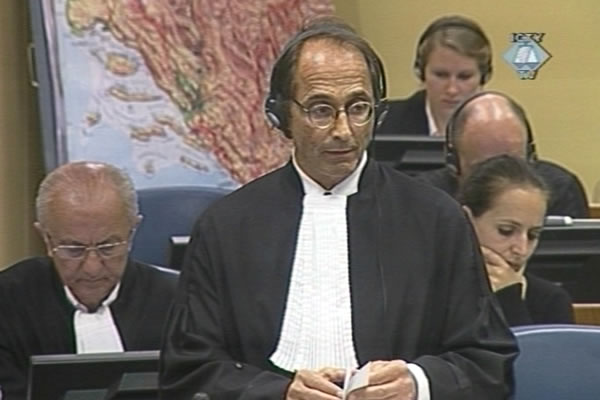 Michael Karnavas, branilac Jadranka Prlića
The attack launched by the BH Army on the Northern Camp HVO barracks near Mostar on 30 June 1003, former commander of the HVO Main Staff Slobodan Praljak contends, was tantamount to ‘high treason and aggression’ whose ultimate goal was to expel Bosnian Croats from BH to Croatia.

In his cross-examination by Jadranko Prlic’s defense counsel, the accused confirmed his previous opinion about the ‘Muslim aggression’ against Herceg Bosna and alleged aspirations of the Bosnian president to carve out an Islamic state in the BH territory not taken by Serbs.

In his examination-in chief, Praljak described Izetbegovic as both a ‘gentleman’ and a ‘shameless liar’, a man who constantly changed his mind in negotiations. Praljak left open the possibility that Izetbegovic’s vacillations were caused by the pressure other Bosniak leaders put on him.

According to Prlic’s lawyer Michael Karnavas this description of Alija Izetbegovic was ‘rather generous’. Relying on Praljak’s argument about the BH aggression against Herceg Bosna and plans for the establishment of an Islamic state, Karnavas implied that Izetbegovic had been in constant collusion with Iran and had been bringing in the Mujahideen to BH to attack Croats, not Serbs.

When Judge Stefan Trechsel warned Karnavas not to testify and not to suggest answers, Karnavas said he wanted to prove that ‘Izetbegovic and the BH Army were members of a joint criminal enterprise’, not Tudjman and former Bosnian Croat leaders, as the prosecution alleges.

Praljak of course didn’t contradict Karnavas, saying that he never had any doubts about the political positions of the Bosnian president; he accused Izetbegovic of refusing the HVO offer of help to lift the siege of Sarajevo. Izetbegovic never seriously contemplated the lifting of the siege, Praljak argued, as he believed that the international community would intervene militarily against the Serb aggression. According to Praljak, Izetbegovic himself told him that when they met once in Mostar in the autumn of 1992.