DEFENSE: CRITICIZING JUDGES’ MOTIVES IS NOT CONTEMPT OF COURT

As Louis Joinet, Florence Hartmann’s defense witness, stressed today, the judges’ motives and the legal reasoning behind their decisions cannot be ‘confidential’ as this would prevent legal critique and control necessary for the functioning of every legal system 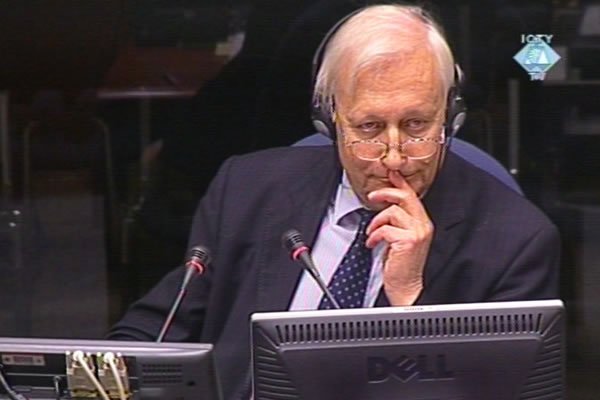 Louis Joinet, defence witness of Florans Artman
According to Louis Joinet, one of world’s leading authorities on freedom of speech, Florence Hartmann has not been charged with contempt of court because she ‘disclosed facts’, the contents of the Appeals Chamber’s decisions, but because she brought to light the ‘judges’ motives’ for the decision to grant confidential status to documents originating from the FRY’s Supreme Defense Council. The judges’ motives and legal reasoning behind decisions cannot remain confidential, Joinet argued, adding that legal critique and control are necessary for the functioning of every legal system.

In one of her incriminated texts, French journalist and former OTP spokesperson says that the Supreme Defense Council documents remained hidden from the public ‘only to protect Serbia from its liability before another UN court’, the International Court of Justice which was hearing the Bosnia Herzegovina vs. Serbia case at the time.

In his extensive international legal career, Joinet took part in laying the groundwork for the Tribunal in The Hague. Speaking today of its objectives – to punish those responsible, to bring justice to the victims, to prevent future crimes and contribute to peace and reconciliation –Joinet particularly stressed that the resolution establishing the Tribunal clearly states that its operation would not violate the right of the victims to seek compensation through appropriate channels, before national courts. Restricting the free flow of information, Joinet contends, has affected the right and the ability of victims to seek compensation because it has prevented them from establishing the truth. If access to evidence is restricted to the victims, the victims are denied any satisfaction: moral, through establishing the truth, and financial, through reparation.

Joinet also spoke of the importance of ‘transparency’ for the credibility of the Tribunal in The Hague, especially in the final stages of its operation. If the public gets the impression that some things have been covered up, the French freedom of speech expert warned, the Tribunal would lose its credibility.

Prosecutor amicus curiae McFarlane started cross-examining Joinet as the hearing today drew to its close. He will continue tomorrow. The defense will call two witnesses tomorrow, Nura Alispahic from the Association of the Mothers of Srebrenica and Natasa Kandic from the Humanitarian Law Center in Belgrade.