Continuing her evidence at the trial of Florence Hartmann, the director of the Humanitarian Law Center in Belgrade asked for a review of the Appeals Chamber’s decisions granting confidential status to the documents of the FRY Supreme Defense Council. Closing statements will be delivered on Friday 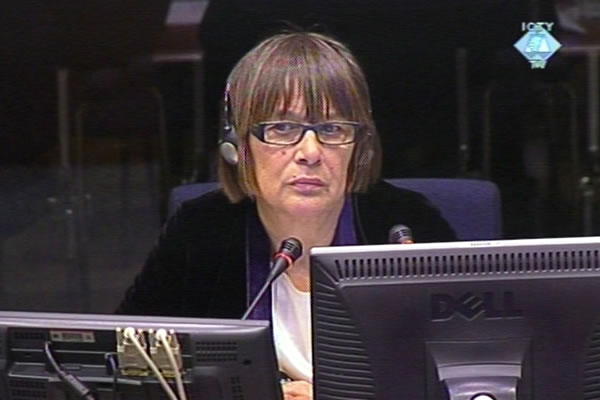 Natasa Kandic, defence witness of Florans Artman
The testimony of Natasa Kandic, director of the Humanitarian Law Center in Belgrade, ended the evidentiary stage at the trial of French journalist Florence Hartmann. Hartmann is charged with contempt of court for publishing information about confidential decisions of the Appeals Chamber. Those decisions granted protective measures to documents of the FRY Supreme Defense Council submitted to the OTP by the Belgrade authorities for the Slobodan Milosevic trial.

In her answers to the defense two weeks ago Natasa Kandic said those documents and the request of the Serbian authorities to keep them away from the public to prevent them from being used before the International Court of Justice in the BH vs. Serbia Montenegro case were openly discussed in the media and by the non-governmental organizations in Serbia long before Florence Hartmann published the incriminating information.

Canadian lawyer Bruce MacFarlane acting as the prosecutor amicus curiae in this case attempted in his cross-examination to diminish the scope and significance of those debates claiming that they were held in a limited circle of human rights activists and not before a ‘wider public’. Those were nothing but guesswork, he said, because nobody saw the contents of those documents.

Natasa Kandic replied that the Serbian public still believed that Milosevic ‘didn’t do anything bad’ and that the Tribunal was established to try Serbs. That public bought into the story fed to them by the politicians who argued that Serbia should ‘defend itself by all means against the genocide charges’, Kandic added. Because of constant fear-mongering, the public believed that if the International Court of Justice found it responsible for the genocide in Srebrenica, future generations in Serbia would have to pay reparations to BH.

The Humanitarian Law Center director believes that the countries that were warring parties in the former Yugoslavia should not be granted protective measures for documents from the time of war if there are serious indications that they want to cover up their responsibility for war crimes and genocide.

After Kandic said that the Florence Hartmann trial should serve to ‘review the decision to grant confidentiality to the Supreme Defense Council’s documents’, the prosecutor amicus curiae accused her of using her testimony to ‘accomplish her goals’. The witness replied that she had ‘no private goals’; as a fighter for human rights her goal is to establish the truth and responsibility for war crimes as the greatest guarantee that they wouldn’t happen again.

The closing statements of both sides at the trial of the former Tribunal’s OTP spokesperson have been scheduled for Friday, 3 July 2009.