PRALJAK: NO ULTIMATUM FOR THE BH ARMY

As his evidence continues, the accused Praljak argues that the HVO did not issue an ‘ultimatum’ to the BH Army on 15 January 1993, demanding that they either place themselves under HVO command or withdraw from the three provinces in Herceg Bosna because ‘everything’ had already been agreed the day before between Franjo Tudjman and Alija Izetbegovic 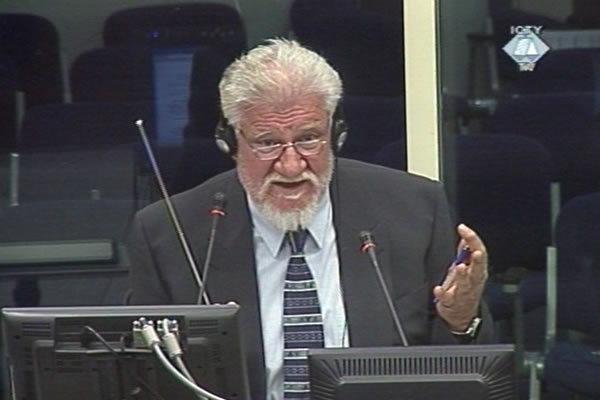 Slobodan Praljak svjedoči u svoju odbranu
The indictment against General Slobodan Praljak and five former Bosnian Croat leaders alleges that the HVO attacked the BH Army positions in early 1993 in an effort to forcibly implement the Vance-Owen peace plan. According to the prosecution, Croats misinterpreted the plan, believing that Croats should have sole power in the Herceg Bosna provinces, and issued an ultimatum on 15 January 1993 to the BH Army to either place themselves under HVO command or withdraw from Croat-controlled provinces.

‘There was no ultimatum’, General Praljak claimed. In Praljak’s words, the text of the decisions signed on 15 January 1993 by Bosnian Croat leaders Jadranko Prlic, Bruno Stojic and Milivoj Petkovic was agreed upon the day before in Zagreb by Franjo Tudjman and Alija Izetbegovic. Gojko Susak and Mate Boban attended the meeting together with international mediators Vance and Owen.

Praljak claims that on the morning of 15 January he went to Mostar where he delivered the agreement to Prlic, Stojic and Petkovic who made it public. One ‘possible’ mistake, Praljak noted, was that they did it in Mostar although in Zagreb it had been agreed that BH defense minister Bozo Rajic would first make it public in Sarajevo. ‘The HVO wanted wholeheartedly to stop the conflict, hence the haste’, the accused clarified, adding that it was possible that he ‘forgot’ to tell Prlic, Stojic and Petkovic to wait until Rajic released the agreement first.

Praljak claims Rajic made the agreement public the next day, but on 20 January Izetbegovic rescinded it because he had ‘changed his mind in the meantime’. As Praljak said, this showed that ‘somebody else controlled’ Izetbegovic. Praljak believed Haris Silajdzic was the main culprit for the cancelation of the agreement; Silajdzic ‘pressured’ Izetbegovic with the help of the BH Army generals. Praljak referred to a document signed by Prlic, Stojic and Petkovic, already in evidence as a prosecution exhibit, to corroborate this claim, and then showed a statement by Antun Vrdoljak who allegedly attended the meeting where Izetbegovic was pressured into cancelling the agreement.

In an effort to show that Izetbegovic began reconsidering his decision just one day after he had allegedly consented to the agreement, Praljak showed an excerpt from the minutes of the meeting in Zagreb on 15 January 1993. In the afternoon, Susak asked Izetbegovic to confirm the previous agreement whereby the HVO was to take over power in areas controlled by Croats. Izetbegovic told him that he saw nothing controversial about Gornji Vakuf receiving orders from Sarajevo. Praljak then stopped quoting from the minutes, and the judges indicated they would carefully read all 55 pages of the minutes.