As he continues his evidence, General Slobodan Praljak explains why the siege of Sarajevo was not lifted, why there never was a joint command of the HVO and the BH Army and who in Sarajevo undermined all the agreements with Croats 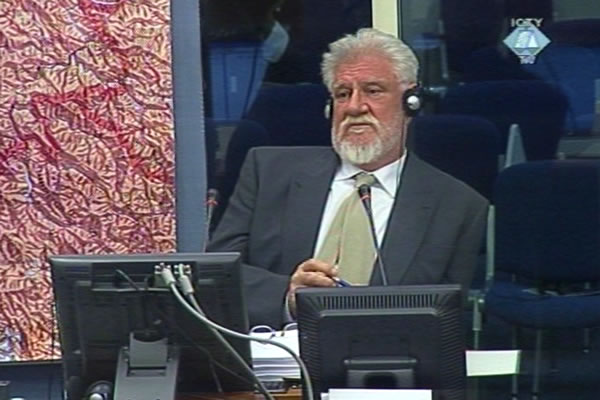 Slobodan Praljak svjedoči u svoju odbranu
Continuing his evidence in his defense, General Slobodan Praljak described how in November 1992 he attended a meeting in Mostar, where he proposed to the president of the BH presidency Alija Izetbegovic that the HVO and the BH Army should lift the siege of Sarajevo in a joint operation. As Praljak noted, his proposal was refused for reasons that were unclear to him.

Praljak presented some hypotheses why his purported proposal for the lifting of the siege of Sarajevo was turned down. First, Izetbegovic didn’t want the HVO to get involved in the effort to de-block Sarajevo. According to Praljak, Izetbegovic was convinced that the international community – ‘when it sees so many people killed’ – would intervene militarily although it was obvious that the siege would go on. Praljak added that the Bosnian president might have turned Praljak’s proposal down because he feared that civilians would flee the city once the siege was lifted.

Praljak maintains he ‘begged’ Izetbegovic to tell the public what BH he wanted to create ‘so that everybody knows what kind of state they are fighting for’. Izetbegovic replied that the country should ‘first be liberated and then there will be talks’. Praljak, on the contrary, felt that ‘an agreement should come first, and then victory would follow’.

At that meeting Praljak proposed to Izetbegovic that the HVO and the BH Army establish a joint command until a political solution could be found because Praljak knew that isolated incidents inevitably lead to conflicts. According to Praljak, the Bosnian president told him vaguely ‘we will try’. Only later did Praljak realize that Izetbegovic was inclined to accept the idea of a joint command but the implementation was prevented by Sefer Halilovic, who commanded the BH Army.

According to Praljak, Halilovic was a member of the former JNA intelligence service, KOS, who thought that ‘all Croats were Ustashas’. With the assistance of Alija Delimustafic, Halilovic ‘undermined’ all Izetbegovic’s agreements with Croats, including the idea of a joint command. Delimustafic was also a KOS agent and a Mujahideen. Praljak referred to books two Bosnian generals Sefer Halilovic and his deputy, Croat Stjepan Siber, wrote after the war.

At the same time, Praljak was trying to paint himself as a man who came to Herzegovina ‘in the maelstrom of war’ ‘on his own initiative’ to ‘help’ establish the HVO as a joint Croatian-Muslim army. Praljak spoke at length about his role in the liberation of Mostar from the former JNA in the summer of 1992, and his efforts to ‘smooth the tensions’ between the Croats and Muslims in Prozor. In Praljak’s words, he went there because Franjo Tudjman had asked him to, but it was ‘his own decision’.