Continuing his evidence in his defense, Slobodan Praljak contends that the UNHCR moved Muslims to third countries arguing that BH was saved thanks to the HVO soldiers 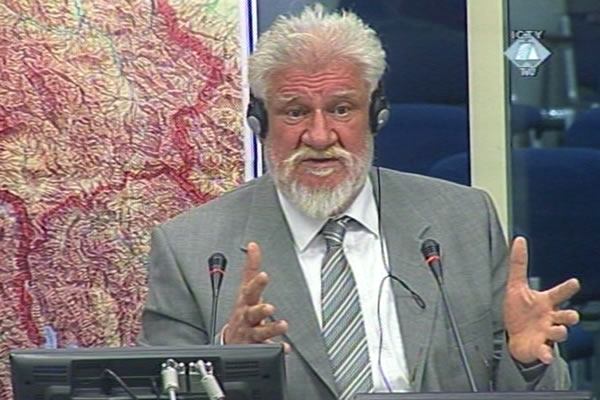 Slobodan Praljak svjedoči u svoju odbranu
Former commander of the HVO Main Staff Slobodan Praljak continued his evidence today, claiming that the UNHCR evacuated Muslim displaced persons and refugees from collection centers in Croatia to third countries during the war, contesting the prosecution allegation that the Croatian authorities did that.

The UNHCR, as Praljak put it, ‘for logically unknown reasons spread panic’ among the refugees in Gasinci, Obonjan and other refugee centers in Croatia ‘spreading lies’ that the Croatian authorities would suspend their refugee status and that they had nowhere to return because the security situation in BH was volatile; their aim was to persuade the refugees to go to third countries. When the judges asked Praljak why in his opinion the UNHCR ‘played that game’, Praljak said that he had no idea.

Quoting from the book I was Alija’s Diplomat by Muhamed Filipovic, Praljak tried to illustrate his earlier argument that the Muslim leadership headed by Alija Izetbegovic was not prepared when the war broke out. This is why, Praljak maintained, it was necessary to establish Herceg Bosna to ‘defend BH’ against the Serbian aggressor. Its other goal, Praljak said, was to accomplish ‘the mirror equality’ of the Croatian people in BH.

Praljak used quotes from Filipovic’s book about the period before the war in BH to demonstrate Izetbegovic’s ‘blind trust’ in the JNA as the ‘army of peace’. Before the war Izetbegovic declined the offer to enter a loose confederation with Slovenia and Croatia and thus missed the opportunity, in Praljak’s view, to defend BH against the Serbian aggression. As Praljak put it, BH was saved by HVO soldiers.

Izetbegovic at first believed that he could get the whole of BH which he would then set up according to Islamic laws, Praljak claims. After Izetbegovic saw it was impossible, he tried to get at least a part of the territory; the rest would be annexed to Serbia and Croatia. However, since Izetbegovic talked to Serbs about transferring Muslims from Sandzak to Eastern Herzegovina, Croats were not happy with that plan.

As he presented his opinions of this sort, Praljak managed to slip in that he ‘had a very good opinion’ of Izetbegovic as a human being, adding that although Izetbegovic was formally a head of state he never had the actual power to make decisions. Izetbegovic left all major decisions for ‘later’, because he needed time to hear what Omer Behmen and Hasan Cengic – who pulled the strings – thought of them.

Since Praljak quoted often from Filipovic’s book to illustrate his views, Swiss judge Stefan Trechsel reminded him that the author claims in the same book that the HDZ had the same goal as the SDS, that is to annex parts of BH to Croatia. It was a conclusion Filipovic reached later, Praljak said, adding that he didn't have to accept it.