Continuing his evidence today, General Slobodan Praljak expanded his argument on the alleged BH aggression against Herceg Bosna. According to Praljak, in January 1993 the BH Army first attacked Gornji Vakuf and then other Croat-controlled towns including Mostar, because it realized that it couldn’t take anything from the Serbs 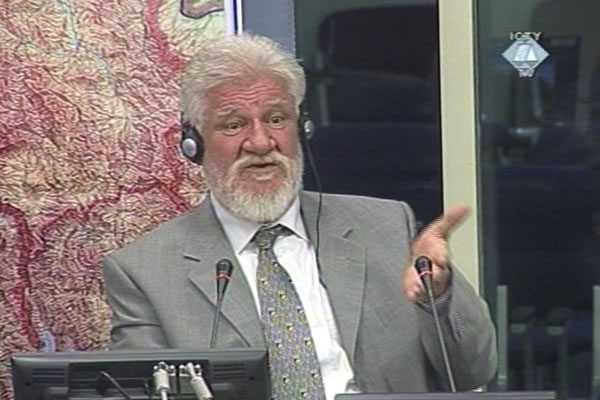 Slobodan Praljak svjedoči u svoju odbranu
In his evidence, General Slobodan Praljak expanded his argument on the ‘planned aggression’ of the BH Army against Herceg Bosna. In Praljak’s words, the aggression started in January 1993 with an attack on Gornji Vakuf; its final objective was to ‘occupy’ all territory under Croat control up to the Croatian border. As Praljak explained, at one point the Muslims ‘realized’ that they ‘couldn’t do anything to Serbs’ and decided to attack their erstwhile Croat allies and intended to grab as much territory as possible.

In an effort to corroborate his argument, Praljak referred to a book Truth about BH, authored by Miroslav Tudjman, son of the late Croatian president. Praljak had asked him to write it. The book is a collection of documents on the attempts to find a peaceful solution for the BH conflict. The book also contains a facsimile of a purported secret agreement between Franjo Tudjman and Alija Izetbegovic of 14 September 1993 in Geneva, published in Vecernji List, a Zagreb newspaper, on 30 January 1994.

As Praljak put it, the two presidents agreed to work together ‘on establishing a state of Croats and Muslims in a BH Union which would later form a confederation with the Republic of Croatia’. The main goal of the agreement, Praljak explained, was to oppose the Serb plans for the unification of all Serb lands into a Greater Serbia which was to encompass parts of BH and the larger part of Croatian territory.

Two days after he signed the agreement, Izetbegovic changed his mind and on 16 September he signed another agreement behind Tudjman’s back establishing a cessation of hostilities with the Serbs. This declaration was signed by Momcilo Krajisnik, the RS Assembly speaker, on behalf of the Serbs. Thus, Praljak concluded, the BH Army ‘unilaterally’ stopped fighting the Serbs and instead launched an offensive against Croats in an area from Gornji Vakuf to Mostar and further south to secure sea access as its objective. ‘What is this if not a division of BH between Muslims and Serbs’, the accused Praljak asked.

Praljak then tried to convince the judges that Tudjman’s intentions towards BH were good; there was no joint criminal enterprise aimed at annexing parts of BH to reach to the 1939 Banovina borders as the prosecution alleged. Tudjman’s position throughout the time, Praljak argued, was that Croatia should be an independent state while Bosnian Croats and Muslims had to live together in BH.