PRALJAK: ONLY GOD COULD DO MORE AND BETTER THAN ME

In his opening statement delivered as his defense case begins, General Slobodan Praljak has presented ‘the Archimedes-Praljak Law’. According to that law, Praljak himself, ‘one Praljak’, is the basic unit of measure 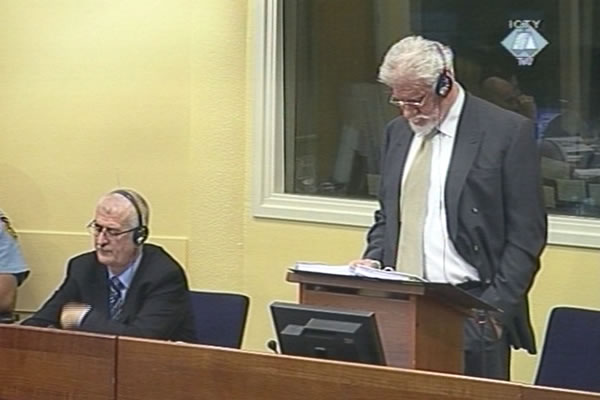 Slobodan Praljak za vrijeme davanja uvodne izjave na početku svog dokaznog postupka na suđenju nekadašnjim čelnicima Herceg Bosne
Former commander of the HVO Main Staff Slobodan Praljak today expounded ‘the Archimedes-Praljak law’ in the opening statement as his defense case began. According to the law, ‘Praljak immersed in a war decreases the amount of evil in that war by ‘one Praljak’’. This unit of measure, Praljak went on, consists of ‘energy and the number of hours per day during which that energy acts’; in his case it ‘was 20 hours a day’, coupled with ‘passion or speed in which that energy, courage, knowledge and intelligence quotients are burned’.

Praljak’s opening statement began with him making a solemn oath, although he didn’t have to do it. He then focused on the role of BH, and Alija Izetbegovic in particular, in the aggression against Croatia by the JNA. Just as he did when the trial started three years ago (Praljak had delivered his opening statement under oath then too), Praljak reminded the court of Izetbegovic’s statement after the JNA attacked the village of Ravno, ‘this is not our war’. Izetbegovic could have prevented the shelling of Dubrovnik or Slavonski Brod but refused to sign a military treaty with Croatia in order not to ‘make the Serbs angry’, Praljak went on to say. When the war broke out in Bosnia, Izetbegovic soon lost control over more than 70 percent of the territory. Despite that, Praljak argued, Izetbegovic ‘acted as a sovereign’ playing a double game: ‘concluding an agreement with Croatia while negotiating simultaneously with the aggressor’, Serbia.

[IMAGE]4080[/IMAGE]Praljak continued to point to ‘possible methodological errors in understanding’. According to Praljak, in new states emerging from a war the terms such as president, minister, general… ‘do not have the same meaning as in stable countries’. Noting the fact that the chaos in social systems necessarily leads to an increase in the number of crimes, Praljak stressed that he didn’t mean to say that those who build new countries have the right to commit crimes. However, Praljak went on to say, only a comprehensive analysis can give an answer to the question whether the crimes were instigated or encouraged or whether they could be explained away as ‘the classic distribution of bad phenomena brought about by any war’.

Explaining the difference between wanting and doing and having power to do, Praljak asked himself a question why Mrs. Thatcher needed several years to resolve the problem of football fans in England or why Sarkozy could not prevent the rampaging in the Paris suburbs and the burning down of cars throughout France on New Year. ‘Does it not hurt us’, the accused asked, ‘that China destroyed a civilization in Tibet?’. ‘The powerlessness to prevent and discover a crime is a horrible and miserable feeling, but to feel that way is not to commit a crime’, Praljak concluded.

Referring to the indictment, accusing him and other Bosnian Croat leaders of taking part in joint criminal enterprise, Praljak asked himself a rhetorical question saying ‘is the whole of history not one big joint criminal enterprise’. Praljak didn’t deny that the crimes were committed, but he chose to lay the blame for them on ‘individuals or smaller groups out of control’ overpowered by ‘desire for revenge’. After his opening statement Praljak began answering questions of his defense counsel Bozo Kovacevic. At first, Praljak delivered long monologues on ‘communist crimes’ in Croatia and Slovenia after the World War II but their connection with crimes in Herceg Bosna in 1993 and 1994 remained unclear. The purpose may emerge as Praljak continues his evidence, estimated to take about two months.