HOW ‘VOLUNTEERS’ FROM CROATIA DEFENDED BH

General Slobodan Praljak contends that the Croatian army never entered BH, except in April 1992, when they did so to defend Dubrovnik. Praljak has confirmed that during the war some 13,000 volunteers fought in BH. They got their salaries and other benefits in Croatia 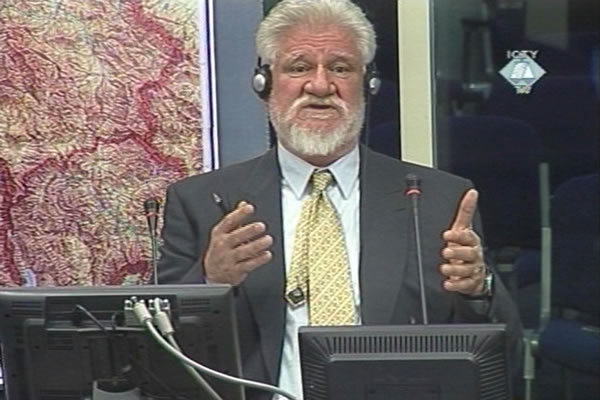 Slobodan Praljak svjedoči u svoju odbranu
Former HVO Main Staff commander Slobodan Praljak continued his evidence in his own defense today. Some 13,000 ‘volunteers’ from the Republic of Croatia fought in BH during the war there, he said. While they fought in the BH theatre of war, the soldiers got their salaries and other benefits in Croatia. In BH, the accused explained, those soldiers were ‘just volunteers’ just as he was.

Volunteers were sent to BH because of the fast advance of the Serb troops which were threatening to overrun the whole BH and reach Croatian borders, Praljak said. If that had happened, a new wave of refugees would hit Croatia, ‘which was already hardly able to breathe’, overcrowded with refugees. In the words of the accused, Croatia also felt ‘an obligation’ to help the neighboring country because a great number of BH citizens had come to defend Croatia in 1991.

According to Praljak, there were no regular Croatian Army troops in the BH territory apart from the volunteers, contrary to what some prosecution witnesses – including European Community monitors – have said. As the accused put it, there were some ‘ignorant’ observers who would see two or three soldiers with the HV insignia and report that they had seen a whole unit. The only time that the HV entered the BH territory, Praljak argued, was in April 1992 to defend Dubrovnik.

Since Praljak stated that before July 1993, when he was appointed commander of the HVO Main Staff, he toured the BH theatre of war several times, the judges enquired into the nature of Praljak’s visits in light of the fact that at that time Praljak served as deputy defense minister in the Croatian government. Praljak's reply was that he went there ‘as a volunteer’ to ‘help’ prevent the conflict between the HVO and the BH Army. As Praljak contends, he never received any tasks from his superiors; he would ‘simply sit in a car and drive to Herzegovina’.

Apart from himself, Praljak used Franjo Tudjman’s grandson as an example of a ‘volunteer’; he spent a part of the war in Capljina. However, Praljak was not able to tell the judges how the service in BH was recorded in the military personnel files of HV soldiers, including Praljak, who had volunteered, as he claimed, to fight there.