FIRST EVIDENCE ON THE MASSACRE IN PODUJEVO

Saranda and Faton Bogujevci, two of five children who survived the execution of 19 women and children in Podujevo, gave evidence at the trial of the Serbian police general Vlastimir Djordjevic 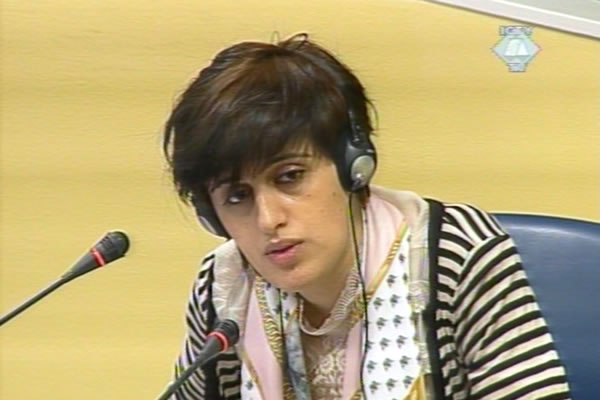 Saranda Bogujevci, svjedok na suđenju Vlastimiru Đorđeviću
As the trial of the former chief of the Serbian MUP Public Security Department, Vlastimir Djordjevic proceeds, the prosecution called evidence on the murder of 14 women and children, members of the families Bogujevci, Duriqi and Ljugaliu, in the Kosovo town of Podujevo. Saranda and Faton Bogujevci, two of five children who survived the massacre, gave evidence today. The third and the fourth count in the indictment against General Djordjevic charges him with murder. These counts were amended in the summer of 2008 to include the incident in Podujevo. As this incident wasn’t listed in the indictment against Milan Milutinovic and five other former Serbian high officials or the indictment against Slobodan Milosevic, this is the first time that evidence on that crime was called before the Tribunal.

Before their testimony today, the prosecution tendered into evidence the statements Saranda and Faton Bogujevci gave to the OTP investigators in 2000 and 2008. In the summaries of the statements, which were read into the record, the witnesses described how several armed men in camouflage uniforms entered the yard of their family property on 28 March 1999. They ordered the women and children to go to the neighboring property. Faton’s mother was the first to be killed, with two shots. Shefkate Bogujevci, Saranda’s aunt, was the second victim. Others, eighteen of them, were lined up along a wall of a house and fire was opened on them.

After a short lull, the women and children who were mostly lying still were once again shot at. Saranda was first shot in the leg; in the second wave, she was shot in the back and her right arm was hit 13 times. Faton was shot five times in the legs. Saranda and Faton survived the massacre together with Faton’s younger brother and two sisters. Fourteen women and children were killed, among them Saranda’s mother, two brothers aged 9 and 13, her grandmother and Faton’s 14-year old sister Nora. At the time of the massacre Saranda was thirteen and Faton twelve.

Six members of the Bogujevci family were killed on 28 March 1999, as were their relatives Fezdrije and Nefise Lugaliju and six women and children from the Duriqi family. Believing they would be safe there, they had come from the neighboring villages and taken shelter at the Bogujevci family compound in Podujevo. The youngest victim from the Duriqi family was only two years old.

[IMAGE]3980[/IMAGE]Saranda and Faton Bogujevci gave evidence before the Belgrade War Crimes court at the trial of Sasa Cvjetan, one of the perpetrators of the Podujevo massacre. He was a former member of the Scorpions, a Serbian MUP special unit. The transcripts of their evidence were admitted into evidence today. Cvjetan was sentenced to 20 years in prison. In 2008, the Belgrade war crimes prosecutors filed an indictment against four members of the same unit.

At the beginning of the cross-examination, Vlastimir Djordjevic’s defense counsel expressed his ‘most sincere and deepest’ condolences to the witnesses. As the cross-examination proceeded, he didn’t’ contest the fact that the crime had actually happened. The defense counsel nevertheless insisted that the survivors had been given first aid by the police. Saranda Bogujevci was not able to tell what unit the uniformed Serbs who helped them belonged to. Faton, on the other hand, said that the men wore blue uniforms and white belts; the vehicle that took them to the Pristina hospital, he added, was most probably a police vehicle.

After the massacre, Saranda, Faton and their three surviving relatives were first treated in the Pristina hospital. In September 1999, they were transferred to Manchester, where they now live, for further medical treatment.