The Trial Chamber has taken into consideration the formal authority over the army and the police the six former Serbian officials had in Kosovo. They faced trial for crimes against Kosovo Albanians in 1999. Furthermore, the Trial Chamber in its judgment took into account the closeness of their ties with Slobodan Milosevic. This has left no doubt as to what Slobodan Milosevic's judgment for Kosovo crimes would have been like, had he lived to see the end of the trial 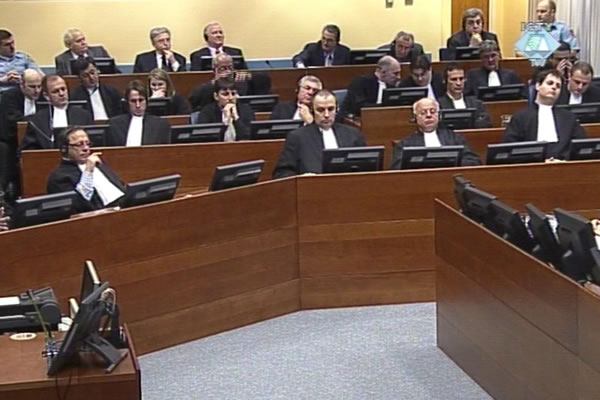 Milan Milutinović, Nikola Šainović, Dragoljub Ojdanić, Nebojša Pavković, Vladimir Lazarević i Sreten Lukić za vrijeme izricanja presude
In the judgment handed down in the Kosovo Six case (Serbian officials charged with crimes against Kosovo Albanians in 1999), the Trial Chamber has concluded that the Serbian president Milan Milutinovic and the deputy federal prime minister Nikola Sainovic did not have any de iure authority, enshrined in laws, to command the army and police. Sainovic was sentenced to 22 years in prison while Milutinovic was acquitted of all charges and released from jail. The Trial Chamber has obviously taken into account the informal, de facto power that the accused had over the army and police, which stemmed from their relationship with the ringleader of the joint criminal enterprise, Yugoslav president Slobodan Milosevic.

‘From the evidence presented during the trial the Trial Chamber did not get a clear impression that Milutinovic had close personal and professional ties with Milosevic’, the judgment says. The prosecution based its claims about Milutinovic’s close relationship with Milosevic primarily on the evidence by Austrian ambassador Wolfgang Petritsch, who spoke about the negotiations in Rambouillet and in Paris in early 1999. This was not enough for the Trial Chamber; the judges relied on the evidence by a number of defense witnesses and on Milutinovic’s interview to the OTP investigators. Milutinovic told the investigators he had met with Milosevic ‘from time to time’ but they had never discussed the military activities in Kosovo. According to Milutinovic, at that time he and Milosevic ‘had a lot of disagreements’. Milutinovic didn’t say what they had disagreed about. When asked if he had told anybody about the differences in opinion between him and the federal president, Milutinovic said that he had told his wife.

Milosevic was also identified as the person who exercised full control over the army and the police in 1998 and 1999. The judges accepted the argument of the prosecution that Milosevic removed those who thought independently and replaced them with people who obeyed him blindly in order to implement the joint criminal enterprise in Kosovo.

Nikola Sainovic was among those, according to the judges, who described him as one of Milosevic’s ‘closest and most trusted men’. The Trial Chamber reached that conclusion on the basis of ‘copious evidence’ about frequent meetings between Sainovic and Milosevic, testimony of a number of both prosecution and defense witnesses who testified about their relationship and Sainovic’s interview with OTP investigators. The judges established that his ‘leading role’ as a political coordinator of civilian and military activities in the province stemmed from his close relationship with Milosevic.

Unlike Milutinovic and Sainovic, General Nebojsa Pavkovic, who commanded the Third Army, and Vladimir Lazarevic, who commanded the Pristina Corps, had the legal authority to exercise command over the army in Kosovo. Although they were part of the same chain of command, Pavkovic was identified as a member of the joint criminal enterprise and was sentenced to 22 years, while Lazarevic got only 15 years for his contribution to the criminal enterprise – the judges did not find that he was a participant. Lazarevic’s and Pavkovic’s superior, chief of the VJ General Staff Dragoljub Ojdanic was also sentenced to 15 years for contributing to the joint criminal enterprise.

Based on the evidence called in the two-year trial, the judges concluded that of the three generals, Pavkovic was the closest to Milosevic during the NATO campaign. Their closeness, the judgment maintained, was corroborated by numerous formal and informal meetings in the spring of 1999. The judges accepted the evidence given by the deputy chief of the military intelligence service Aleksandar Vaslijevic who said that Pavkovic often skipped over the chain of command and went directly to Milosevic without Ojdanic’s knowledge and permission.

Explaining why they found that Lazarevic merely ‘aided’ the joint criminal enterprise and did not participate in it, the judges stated that, unlike Pavkovic, Lazarevic didn’t take part in the decision-making about future actions in Kosovo at meetings with Milosevic and other high-ranking officials before and during the NATO campaign. The sixth accused general, Sreten Lukic attended a number of such meetings, the judges found. This, together with his de jure authority as the head of the MUP Staff over the police on Kosovo qualified him as ‘a full member’ of the joint criminal enterprise. Like Sainovic and Pavkovic, Lukic was sentenced to 22 years.

There is now no doubt left as to what judgment Slobodan Milosevic would have received for the Kosovo indictment, had the former president of Serbia and FRY lived to see the end of the trial.