In its reply to the closing arguments presented by the defense of the six former Serbian officials charged with crimes against Albanians in 1999, the prosecution argues once again why the Trial Chamber should sentence the accused to terms of imprisonment ranging from 20 years to life. After the so-called rejoinder – the response of the defense to the prosecution’s rebuttal – the judges withdrew to deliberate 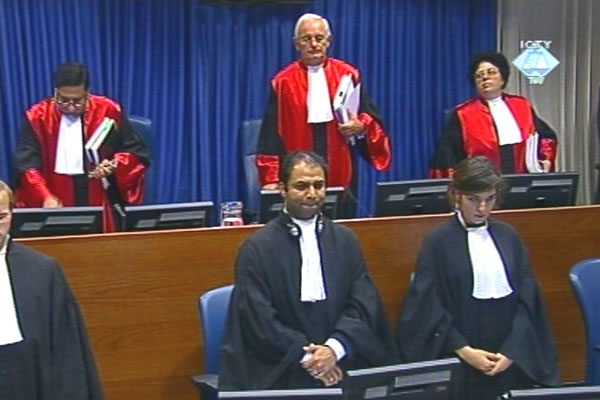 The Trial chamber after concluding the case of the six former officials from Serbia
After the closing arguments delivered over the past few days by the defense teams of the six former Serbian officials charged with crimes against Kosovo Albanians in 1999, the prosecution today presented its arguments in rebuttal. Prosecutor Thomas Hannis re-stated why the Trial Chamber should reject the defense argument calling for the acquittal of the accused, and should instead punish them with terms of imprisonment ranging from 20 years to life.

Defense counsel Toma Fila challenged the prosecution allegation that the former deputy prime minister in the federal government Nikola Sainovic was Slobodan Milosevic’s political envoy in Kosovo. Had this been the case, there would have existed written reports of the communication between Sainovic and Milosevic. In its rebuttal arguments, the prosecution reminded the court that such reports could be oral and not necessarily in writing. The prosecution didn’t contest the claim made by the defense of General Dragoljub Ojdanic, former chief of the General Staff, that he was a ’good soldier’. As the prosecution put it, Ojdanic was nevertheless more willing to blindly obey Milosevic’s orders than his predecessor General Perisic.

The prosecution did not challenge the claims of the teams defending generals Nebojsa Pavkovic and Sreten Lukic that murders, rape and other crimes occur in every war, but noted that the crimes in Kosovo in 1999 were a foreseeable result of the conduct of Serbian political, military and police leadership and not isolated incidents that occur in every war.

After the so-called rejoinder of the defense – a brief response to the rebuttal arguments presented by the prosecution, presiding judge Iain Bonomy brought the last hearing before the delivery of the judgment to its conclusion. Judge Bonomy and his colleagues will make an effort to deliver the judgment, as he said, ’as soon as possible’.