In an effort to contest the evidence on Vujadin Popovic’s involvement in the procurement of fuel for the buses and trucks used to transport prisoners to the Srebrenica execution sites and mass grave, the defense counsel cross-examined Vinko Pandurevic, claiming that the documents were forgeries made by ‘subversive elements’ and ‘internal enemies’ who stole fuel 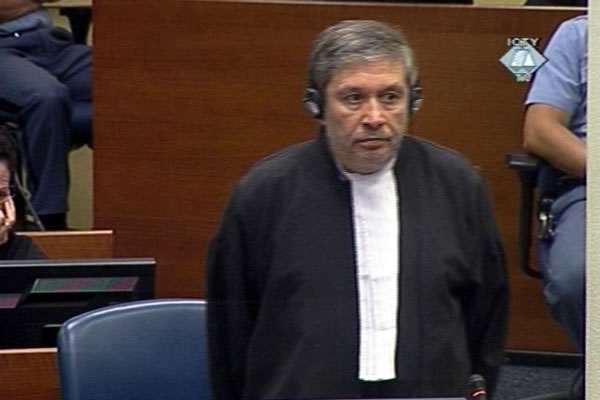 Zoran Zivanovic, defence attorney of Vujadin Popovic
After the defense of Drago Nikolic, former Zvornik Brigade security chief completed its cross-examination of Vinko Pandurevic, he was grilled yesterday afternoon and today by Vujadin Popovic’s defense. In the summer of 1995, Popovic served as security chief in the Drina Corps. In his testimony in his own defense, Pandurevic shifted the blame for the Srebrenica crimes to generals Mladic and Krstic, and in particular, to security officers in the Main Staff, Drina Corps and the Zvornik Brigade, where he served.

Vujadin Popovic is charged with ‘monitoring, facilitating supervising’ the detention and execution of Bosniaks captured after the fall of Srebrenica in July 1995. In the course of its case, the prosecution tendered a log book kept by the duty officer on the Zvornik Brigade. The entry for 16 July 1995, says that Lt Col Popovic called at 14,00 hrs, requesting an urgent shipment of 500 liters of diesel to Pilica. If he didn’t receive the fuel, he said, he would ‘have to stop the work’. At 7 p.m. on the same day, the audio surveillance service of the BH Army intercepted a conversation where one of the speakers said, ‘the problem with the fuel has been resolved’. According to the prosecution, the fuel was needed to transport some 1,000 prisoners from the Kula school to the Branjevo farm near Pilica, where they were executed on 16 July 1995.

Apart from the log book and intercepts, the prosecution also has a work order issued to a Zvornik Brigade driver, dated 16 July 1995, indicating that the fuel is meant for ‘Lt Col Popovic’. The driver Branko Bogicevic testified last June as Popovic’s defense witness, denying that he saw the Drina Corps security officer in Pilica on 6 July. He didn’t know who ordered the fuel, he also testified.

Defense counsel Zoran Zivanovic put it to Pandurevic that Popovic, as the assistant commander for security in the Drina Corps, was in charge of ‘preventing subversive activities and theft’, and that the prosecution claim about him ordering and receiving 500 liters of diesel fuel is based on a forged document – work order issued to a Zvornik Brigade driver.

Pandurevic was doubtful, saying that putting the name of a ‘lieutenant colonel in the security service’ on a forged document was ‘not the best way to steal’. However, the defense counsel insisted that fuel theft at that time was ‘a subversive activity on the part of internal enemy’ and that Popovic was duty bound to fight it. ‘This was not a subversive activity, this was just garden-variety theft’, Pandurevic retorted, adding that the perpetrators were ‘thieves, not internal enemies’.

Pandurevic also claimed he ‘never read’ the reports about the procurement and consumption of fuel and has no knowledge of the topic. He was unable to explain why the fuel consumption ‘grew from 400 to 2,000 liters per day in the period between 13 and 16 July’, as evidenced by the Zvornik Brigade records. He did note that combat operations were ongoing at the time, with the involvement of combat and transport vehicles. There was also some activity that involved the use of construction machinery, he said. According to the prosecution evidence, the excavators and bulldozers from the Zvornik Brigade and local companies were used to dig mass graves at several execution sites in Srebrenica.