At the Momcilo Persia trial, British reporter Martin Bell describes the aftermath of the shelling and sniper attacks on Sarajevo and its residents between 1992 and 1995, when he covered the siege for the BBC 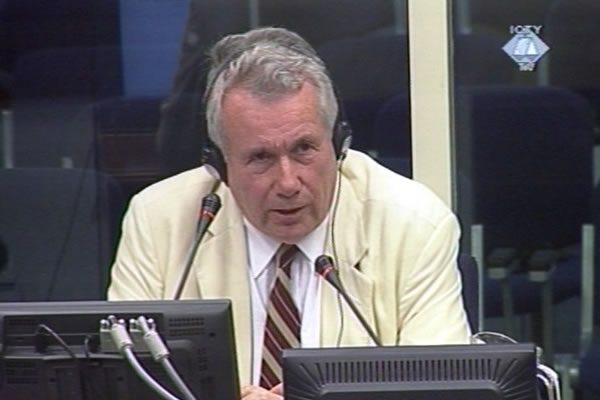 Martin Bell, svjedok na suđenju Momčilu Perišiću
‘There was no monopoly on suffering and ordeals of the civilians in Sarajevo. People lived as if trapped. Times were hard for people on both sides,’ said Martin Bell, BBC war correspondent, at the trial of former chief of the VJ General Staff Momcilo Perisic. He was describing the aftermath of the shelling and sniper attacks on the civilians in Sarajevo between 1992 and 1995. Perisic is on trial for providing personnel, financial, logistic and other support to the VRS. The prosecution contends he thus contributed to the crimes in Sarajevo.

While he was in Sarajevo, he was under the impression that the civilians were deliberately targeted by the snipers, who fired on the people ‘as they stood in water lines or rode in trams,’ Martin Bell said. According to the British reporter, ‘people were defenseless but had to leave their homes’. As the war drew to a close, French UNPROFOR troops used their armored vehicle to provide cover for the people, by moving between the Assembly building and the sniper positions.

The fighting in Sarajevo was ‘seasonal’, Bell said. In January and February, there were fewer incidents, but as soon as the snow melted in March, ‘the attacks picked up pace’. Bell assessed the equipment of the two warring factions, saying that the BH Army had more people but the VRS had the upper hand because of the heavy weapons it had. The VRS used tanks, Bell said, and phosphorus rounds and modified air bombs which were ‘very destructive’. The indictment against General Perisic lists three incidents when four persons died and 24 were injured by modified air bombs.

Through Bell’s testimony, the prosecution is trying to show that the suffering of the civilians in Sarajevo was covered by the world media; General Perisic, who was the chief of the VJ General Staff at the time, had at his disposal the information about the crimes committed in the city. Bell confirmed that Sarajevo in 1992 and 1993 was ‘full of reporters’. After March 1994, the interest of the public waned, he said, because it was ‘an old war that had been going on for a long time’. ‘At that time, a royal divorce was much more newsworthy than a war in Europe’. Things changed in 1995, after the massacre in Srebrenica, when Bosnia came ‘into the agenda and conscience of the international community’, Bell said.

In the cross-examination, General Perisic’s defense counsel for the most part quoted from Bell’s book, In Harm's way, where the British journalist presents his views of the conflict and the warring factions.