Momcilo Perisic’s defense counsel has claimed the shell that hit the Simon Bolivar elementary school on 16 June 1995 in Dobrinja was fired from BH Army positions. A protected prosecution witness who took part in the investigation has explained why this was not possible 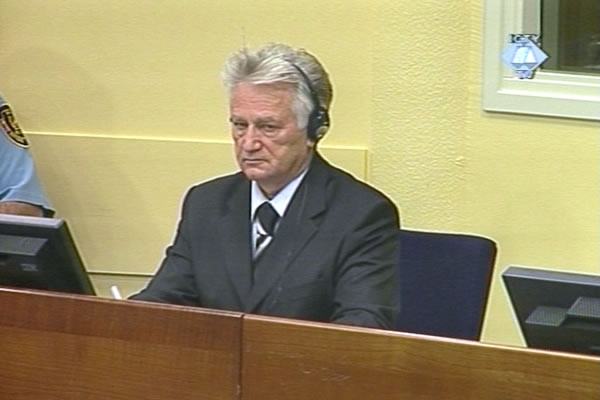 Momcilo Perisic in the courtroom
Former member of the BH MUP counter-sabotage unit protection is testifying at the trial of General Momcilo Perisic under protective measures as witness MP-238, with image and voice distortion. He took part in hundreds of crime scene investigations at locations where shells landed in the course of the four-year siege of Sarajevo. Two of those investigations are listed in the indictment against the former chief of the VJ General Staff: the Simon Bolivar elementary school in Dobrinja and the Markale market. In the first incident, on 16 June 1995, seven civilians were killed and 12 were injured. There was a water pump hidden in the school. Forty three persons were killed and 75 were injured on 28 August 1995 in the Markale incident.

Prosecutor Carter tendered into evidence the statement the witness gave to the OTP investigators in May and June 2008 together with the transcript of his evidence at the trial of former Sarajevo-Romanija Corps commander Dragomir Milosevic in February 2007. The prosecutor asked the witness just some technical questions today and his examination-in chief was completed in less than half an hour.

Perisic’s defense counsel focused only on the Dobrinja incident in his cross-examination, leaving out the Markale massacre. He put it to the witness that the shell that hit the school could have been fired from the BH Army-held positions although the shell bore the markings of the Krusik factory in Valjevo as the Sarajevo police investigation team found. Defense counsel Guy Smith claimed the Bosnian side had confiscated a number of Serb shells and had used them, among other purposes, to attack civilian targets in the city.

The police officer from Sarajevo replied that this was merely a repetition of ‘well-known insinuation that Bosnians were targeting themselves’. The witness did admit that the BH Army had used Serb shells they had captured, but he claims the Bosnian positions were just 200 m away from the Simon Bolivar school, too close to be targeted by a 120 mm mortar shell. ‘This would be as if you tried to take off in a plane from this courtroom’, the witness explained.

The defense counsel corroborated his argument by a statement given to the OTP investigators by former UN military observer Thomas Hansen. Hansen had said that the military observer team had investigated the scene in Dobrinja immediately after the Sarajevo police had completed their investigation. They were unable to establish where the shell was fired from. The Danish officer drafted the controversial report where he concluded that a modified air bomb that hit the Sarajevo TV on 28 June 1995, killing one and injuring 28 persons, was fired from the BH Army positions. When he was called by the Trial Chamber at the General Milosevic trial to clarify his argument, it became clear that he had only second-hand information about the incident and that he based his report on the information he received from a ‘Captain Idriz from Kenya’.

In the re-examination, the prosecutor showed a daily report issued by the UN command in Sarajevo on 16 June 1995. The daily report mentions that a mortar shell ‘fired from the positions held by the Bosnian Serb army’ at 12.46 hit the center of Dobrinja; the elementary school was there. The witness found this completely consistent with what his investigation team had established.

General Perisic is charged with providing personnel, logistic and other support to the Bosnian Serb army; he thus contributed to the artillery and sniper terror campaign in Sarajevo. The trial continues on Monday as the prosecution has no new witnesses to call this week.