In its opening statement, the prosecution announces it will rely on insider witnesses to prove the responsibility of Vlastimir Djordjevic for crimes committed by the police in Kosovo and in particular for the clandestine operation to transfer the victims’ bodies to mass graves in Serbia. The accused himself has presented an opening statement. ‘I merely relayed the orders’ to the interior minister, late Vlajko Stojiljkovic, Djordjevic says 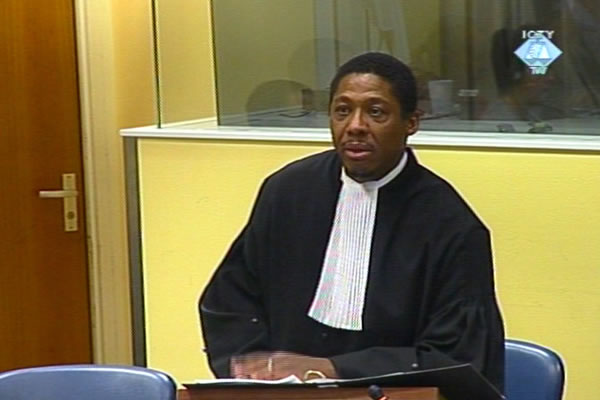 Chester Stamp, tužioc na suđenju Vlastimira Đorđevića
The trial of former assistant interior minister and chief of the Serbian Public Security Department Vlastimir Djordjevic started today with the opening statement delivered by prosecutor Chester Stamp and the statement of the accused himself.

As Stamp indicated, the prosecution intends to prove that the accused participated in the joint criminal enterprise aimed at the modification of the ethnic structure in Kosovo and establishing permanent Serbian control over the province. The implementation of those objectives began in 1990s, the prosecutor noted, adding that the Serbian leaders decided to implement its final stage in the spring of 1999 during the NATO campaign. Thousands of Kosovo Albanians were killed and some 800,000 of them were expelled in that period. Apart from Djordjevic, Stamp named Slobodan Milosevic, Milan Milutinovic, Nikola Sainovic, generals Dragoljub Ojdanic, Nebojsa Pavkovic and Vladimir Lazarevic, the then interior minister Vlajko Stoiljkovic and his assistant Obrad Stevanovic, Sreten Lukic, chief of the MUP Kosovo Staff, and Rade Markovic, chief of the State Security Department as participants of that enterprise.

Units controlled by the accused, Stamp argued, took part in joint actions with the army; numerous crimes were committed against Albanian civilians in those actions. The pattern was always the same: a village or a town would be surrounded, and one exit was left for the civilians. The place would then be shelled and the police would then enter it, expelling any remaining civilians, often burning and looting houses, and killing, abusing and raping the people.

The prosecution, Stamp emphasized, ‘is prepared to accept the argument’ that the KLA members had committed serious crimes against Serbs; in his opinion, it would be pointless to use this to justify crimes committed by the Serb side.

The prosecutor went on to list several places in Kosovo where serious crimes against civilians were committed. More than 300 villagers were killed in the village of Meja near Djakovica. In the village of Bela Crkva, some 100 persons were burned to death. At least 47 women and children of the Berisha family were massacred in Suva Reka. In Djakovica, 20 women and children were killed. The annex to the indictment lists the names of 838 victims, 53 of which were children under 16 years, 41 women and 92 persons older than 65. ‘This cannot have happened in a legitimate anti-terrorist campaign’, the prosecutor concluded. Particular emphasis was placed today on Djordjevic’s role in covering up the crimes by transferring victims’ bodies from Kosovo to locations in Serbia, some of them 300 km away from the locations where the victims were killed.

[IMAGE]3881[/IMAGE]The defense counsel decided to leave the opening statement for the beginning of the defense case, but the accused delivered a 30-minute opening statement which was not given under oath. In it he highlighted what are likely to be key defense arguments. Like Milosevic and the accused in the Milutinovic et al. case, Djordjevic maintains that Albanian civilians were not deported or forcibly transferred; according to him they left their houses and villages in fear of NATO air strikes and of clashes between the Serbian troops and the KLA. The KLA itself forced them to flee in order to create ‘a bogus humanitarian catastrophe’. The Serb police and military actions were not aimed against civilians, the accused stressed. Their objective was to neutralize the terrorists, to establish law, order, and to make sure all citizens and their property were safe’. It is true that in this war, as in every war, crimes were committed, Djordjevic said, but they were ‘not planned or instigated’. He himself ‘was not informed about any punishable conduct of MUP units’.

Speaking about his role in the secret operation to transfer the bodies of Albanian civilians from Kosovo to Serbia, Djordjevic said today that he was ‘just relaying’ orders issued by Vlajko Stoiljkovic, the then interior minister. Stoiljkovic was also indicted for crimes in Kosovo, but committed suicide before he could be surrendered to the Tribunal.

The prosecution will call its first witness tomorrow.