In the cross-examination of Herceg Bosna’s former finance minister Neven Tomic, the prosecution has brought up a statement Jadranko Prlic gave to the OTP in December 2001. When he found himself sharing a courtroom with five other accused Bosnian Croat leaders ‘who were on completely different points of the compass’, the former Herceg Bosna prime minister first wanted his case to be severed. Then he asked that that statement not be admitted into evidence but his request was rejected 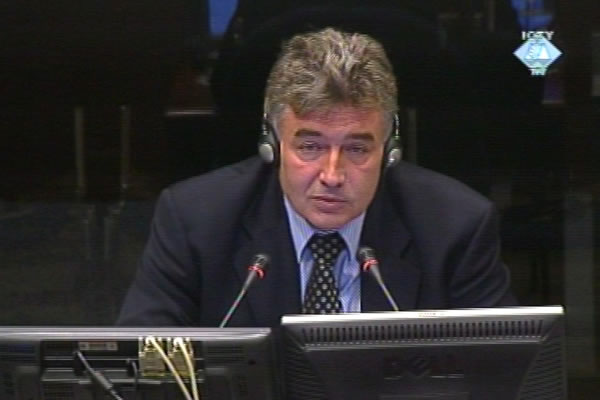 Neven Tomic, defense witness for Jadranko Prlic
On 13 and 14 December 2001, former Herceg Bosna prime minister Jadranko Prlic gave a statement to the OTP investigators in Mostar in the presence of his attorney Camil Salahovic. In the statement Prlic confirmed the Bosnian Croat political and military leaders were responsible for crimes the HVO committed during the Croat-Muslim conflict in BH. However, when Prlic and five other accused Bosnian Croat leaders ‘who were on completely different points of the compass’ found themselves sharing a courtroom, the former Herceg Bosna prime minister first asked that his case be severed from others, and then he demanded that his statement not be admitted into evidence but his request was rejected.

In the final part of his cross-examination of Neven Tomic, former finance minister in the Herceg Bosna government, the prosecutor referred to the statement Prlic gave to the OTP investigators. In the statement, Prlic admits that the war was waged by ‘political leaders through the HVO Main Staff’. When the investigators asked him who in his opinion was responsible for the crimes committed during the Croat-Muslim conflict, Prlic said that that there is a ‘long list’ of names which includes Pero Kovacevic, Jozo Maric, Mijo Tokic, Ante Jelavic and many others.

The witness disagreed with the prosecutor’s suggestion that Prlic himself had been one of the political leaders of Bosnian Croats. As the witness put it, neither Prlic nor his minister at that time, including the witness himself, could be considered political leaders. Mate Boban, former HZ HB president, and presidents of municipalities who were at the same time members of the HZ HB Presidency were in charge of politics, the witness explained. The HVO was part of the executive branch, yet it was also powerless in relation to the municipality presidents in the Presidency.

The prosecutor reminded the witness that the HZ HB Presidency met only twice before the conflict with the BH Army and in its course. At the same time, the prosecutor reminded him, Prlic was very active politically. The prosecutor quoted from Prlic’s statement where Prlic brings up the responsibility of two other ministers, Bruno Stojic and Valentin Coric, saying that Stojic and Coric were ‘against him’ because they didn’t implement the HZ HB regulations. In Prlic’s words, he and the former interior minister were ‘on completely different points of the compass’ on every single issue.

The witness replied that he ‘cannot speak of individual responsibility of persons Prlic mentioned in his statement until they are proven guilty’. The witness gave the same answer when the prosecutor asked him about the claims Prlic made about the responsibility of HVO military units. ‘Crimes did happen, but I don’t know who is responsible’, the witness said. This prompted the prosecutor to say that the witness took part in a fundraiser for Dario Kordic – sentenced to 25 years for planning the attack on the village of Ahmici – at the time when Kordic was on trial before the Tribunal. The witness confirmed this allegation.

Since the beginning of his trial in April 2006, Prlic has asked twice for the severing of his case from the cases of the five other accused Bosnian Croat leaders. Both of his motions were rejected. The Trial Chamber with French judge Antonetti presiding rejected the motions filed by Prlic’s defense and defense teams of the five other accused opposing the admission into evidence of Prlic’s 2001 statement. It is interesting to note that Kenneth Scott, chief prosecutor in the case against the former Herceg Bosna leaders, was one of the investigators to whom Prlic gave the controversial statement.