As member of the Gornji Vakuf War Presidency was answering the judges’ question if the HDZ in BH was a ‘satellite of the Croatian HDZ’, an interpreter was heard say ‘oh yes it were, it bloody were’ in English 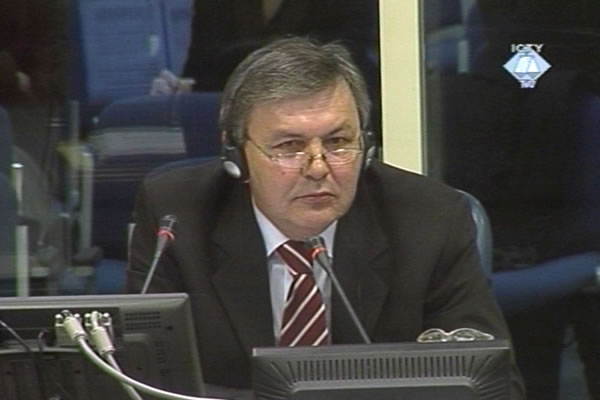 Zdravko Batnic, defense witness for Jadranko Prlic
Zdravko Batinic, former member of the Gornji Vakuf Presidency during wartime, claims that the Muslim side was responsible for the outbreak of the conflict in that municipality. Testifying in the defense of the former Herceg Bosna prime minister Jadranko Prlic, the witness described three incidents which led to the war between the BH Army and the HVO in Gornji Vakuf.

The first incident happened on 20 June 1992 when, as the witness alleged, Territorial Defense troops fired the first shells on the Croatian part of the town. Hanefija Piric, a/k/a Paraga, who commanded the Green Berets, was responsible for that incident, the witness claims. The residents of Gornji Vakuf grew more afraid and mistrustful of the other ethnic community after the incident.

The efforts to keep the peace were further hampered when a new clash occurred in the night of 25 May 1992. The exchange of fire that night continued into the days that followed. As the witness stated, Fahrudin Agic, a TO commander, admitted at a meeting in late May 1992 that ‘some TO commanders lost it and decided to open fire without anyone’s approval’.

The conflict between Croats and Muslims broke out on 11 January 1993, the witness said. He was unable to specify who started the shooting that day, but he nevertheless claimed that the Muslims had been taking down the flags and other Croatian emblems that had been displayed all over the town on the eve of Easter and New Year. When the conflict began, the witness put on the HVO uniform and took up a rifle because his house was a hundred meters away from the frontline.

The witness claimed that the HDZ in BH had always, ‘from its inception to this day’ been in favor of an integral and independent Bosnia and Herzegovina. As the witness was answering the judges’ question whether the HDZ in BH had actually been ‘a satellite of the Croatian HDZ’, an interpreter was heard say, ‘oh yes it were, it bloody were’’, in English. The accused Slobodan Praljak strenuously protested, claiming that he heard laughter and a comment, ‘Tudjman’s vassals’ on channel six, allocated for Bosnian/Croatian/Serbian language. He found such comments ‘unacceptable and offensive’.

The judges noted they were ‘immune’ to any such comments because they didn’t understand the local language. After the break, an announcement was made that the original interpreters had been replaced and that an enquiry would be conducted into the incident.