In his evidence as defense witness of the former prime minister Jadranko Prlic, Neven Tomic, former Herceg Bosna finance minister, has accused the ‘Muslim leadership in Sarajevo’ of obstructing peace agreements in BH 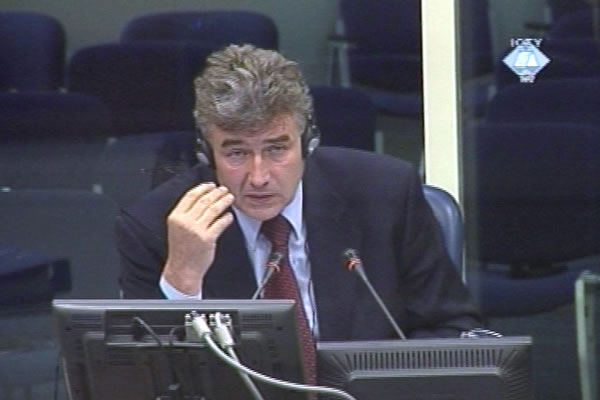 Neven Tomic, defense witness for Jadranko Prlic
Former Herceg Bosna finance minister Neven Tomic continued his evidence at the trial of the former Bosnian Croat leaders. Tomic accused Alija Izetbegovic, former president of the BH Presidency, and other members of the wartime government in Sarajevo, which he labeled ‘Muslim’, of deliberately stalling the implementation of all peace agreements in BH from early 1993 to the end of the war.

Testifying in the defense of the former Herceg Bosna prime minister Jadranko Prlic, Tomic said that the ‘Muslim leadership in Sarajevo’ headed by Izetbegovic advocated a centralized structure in BH based on the ‘one person one vote’ principle. They saw every peace agreement in BH as a stage leading to that goal, starting from the Vance-Owen peace plan in the spring of 1993 to the Dayton Agreements signed in December 1995.

In the witness’s words, after the Vance-Owen plan was signed, ‘the Muslim leadership’ tried to revive the idea of dividing Bosnia Herzegovina into provinces of Mostar, Travnik and Zenica. This didn’t suit the Croats since, the witness noted, it meant that the Herceg Bosna institutions would be abolished before dealing with the issue of its defense. As the witness explained, parallel government structures at both the provincial and state levels would have led to ‘chaos’.

The witness accused the ‘Muslim leadership’ of obstructing the federal authorities because they ‘were not interested’ in the implementation of the Washington Agreement in the spring of 1994. This agreement ended the conflict between the HVO and the BH Army and established the federal union of the two ethnic groups. While Croats insisted on the establishment of new institutions in the BH Federation, ‘the Muslim leadership’ was busy reviving the bodies that had existed in the Republic of Bosnia Herzegovina where Croat representatives would then gradually be involved. That is why, the witness maintained, the Washington Agreement was not fully implemented before early 1995.

In the course of the marathon examination-in chief that took more than seven hours Prlic’s lawyer Michael Karnavas noted that the witness had held various high positions in the state and federal bodies in Bosnia Herzegovina after peace was restored. He was elected the mayor of Mostar in 2000 by the representatives of all three constituent peoples in BH.

Tomic will be cross-examined tomorrow by the defense counsel of the other five accused Herceg Bosna leaders.