In his cross-examination, Karadzic never showed any signs of confusion or wavered in the face of the evidence showed to him by the prosecution; he stuck to the claims he made in his written statement. Karadzic’s written statement was admitted into evidence at the appellate proceedings in the Momcilo Krajisnik case. The prosecutor tried to challenge the credibility of Karadzic as a witness and make him show his hand and reveal how he intends to defend himself at his impending trial 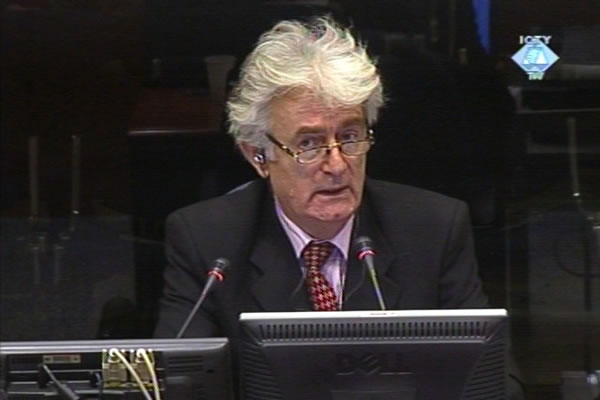 However, the risk was greatly reduced by two eleventh hour moves. The Registry first ordered US lawyer Peter Robinson to protect Karadzic from any questions that might incriminate him. After that, on Monday the Appeals Chamber granted Krajisnik’s request to introduce Karadzic’s evidence through a written statement instead of viva voce; this decision restricted both the time and scope of the prosecution cross-examination.

Peter Robinson was busy today with countless interventions, asking the judges to allow Karadzic not to reply to a number of prosecution questions. Robinson intervened after the first question about Karadzic’s claim that the Bosnian Serb leadership ‘didn’t conduct a policy of ethnic separation’. Robinson’s last intervention followed the last question about a report on the ethnic cleansing of one Bosnian village and the execution of local men. The judges for the most part sustained Robinson’s objections, allowing Karadzic not to reply to questions of that kind.

Prosecutor Alan Tieger juxtaposed Karadzic’s claims in his statement with the evidence called during the Momcilo Krajisnik trial; at the end of the trial, Krajisnik was sentenced to 27 years in prison. Karadzic never showed any signs of confusion and never wavered in the face of the evidence which included documents of the Serbian Democratic Party, minutes from meetings of the Bosnian Serb Presidency or Assembly and the VRS Main Staff directives and other documents. Karadzic stuck adamantly to the claims from his statement.

Karadzic denied that there was ever a ‘wartime’ or ‘extended’ Presidency which purportedly included Krajisnik; as he put it, there was only the usual three-member presidency consisting of Karadzic, Biljana Plavsic and Nikola Koljevic. According to Karadzic, the so-called ‘Variant A and B’ document containing directions for the take-over of municipalities with a Serb minority is ‘an expert opinion drafted by frightened retired officers’. The SDS Main Board merely allowed the document to ‘circulate’, Karadzic said, allowing the possibility that some SDS municipal boards ‘found it apposite to consider and implement it’. In Karadzic’s view, the six Serb goals in BH evolved from what was promised to the Serb side during the peace negotiations, from Lisbon conference to the Dayton peace accords. The goals were ‘political’, Karadzic said. It was true that they were forwarded to the army, but only to ‘let the soldiers know what is offered and what they shouldn’t do’. Serb soldiers, for examples, were not supposed to cross to the left bank of the Una River since Serbs were granted only right bank of the rive. The third strategic goal referring to the elimination of the border on the Drina river, Karadzic noted, was completely misinterpreted. As he explained, the Drina was not seen as ‘a border between Serb states’ but a ‘border between worlds: Orthodox, Catholic and Islamic’. In Karadzic’s opinion, this border had to be eliminated.

The prosecutor probably didn’t expect Karadzic to change the claims he made in his written statement in the face of the evidence. It was obviously his intention to contest the credibility of Karadzic as a witness both in his viva voce testimony and in the written statement, and to force Karadzic’s hand and make him reveal how he intended to defend himself at the upcoming trial.