KARADZIC TO TESTIFY IN KRAJISNIK’S DEFENSE IN NOVEMBER

Former Bosnian Serb assembly speaker Momcilo Krajisnik has been permitted to call Radovan Karadzic to testify in his defense in the appellate proceedings because Karadzic ‘was previously unavailable’. Karadzic’s examination-in chief and cross-examination is expected to take place from 3 to 5 November 2008 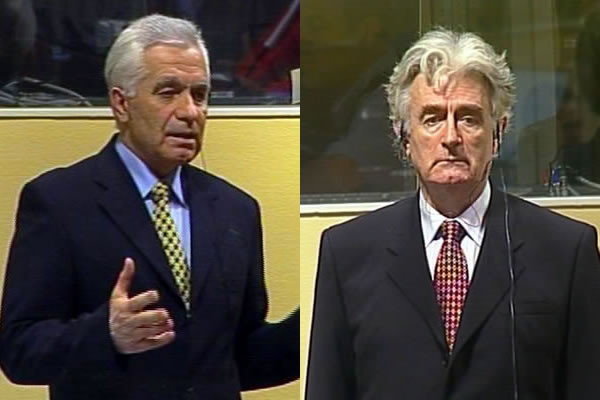 Momcilo Krajisnik and Radovan Karadzic
The Appeals Chamber granted Momcilo Krajisnik’s request to call Radovan Karadzic as an additional witness in the appellate proceedings, it was revealed at the Tribunal today. The decision notes that Karadzic ’was unavailable’ during the trial and that his evidence might influence the final judgment. This is in line with the rules allowing additional evidence to be called in the appellate proceedings.

The Trial Chamber convicted the former Bosnian Serb Assembly speaker Momcilo Krajisnik of extermination, murder, deportation, forcible transfer and persecution of Bosnian Muslims and Croats in 1992. Krajisnik got 27 years in prison. His one-time close associate and president of Republika Srpska Radovan Karadzic now faces charges of genocide and other crimes in BH from 1992 to 1995.

The Trial Chamber notes in its judgment that Krajisnik and Karadzic formed the ’central core’ of the joint criminal enterprise whose goal was ‘to ethnically recompose the territories designated by the Bosnian Serb leadership’. The goal was to be achieved by a campaign of expulsions, killing, detention and other crimes in order to ’drastically reduce number of Bosnian Muslims and Croats’. In its judgment, the Trial Chamber maintained that Krajisnik and Karadzic ’ruled Republika Srpska as their private fief’ and that Karadzic treated Krajisnik ’as his personal prime minister’.

Krajisnik and Alan Dershowitz, who is representing Krajisnik on the issue of joint criminal enterprise, were granted permission to meet with Karadzic in the UN Detention Unit prior to Karadzic’s appearance in court. The prosecution must get a summary of Karadzic’s evidence by 27 October 2008. Krajisnik, who believes that the evidence of the former Bosnian Serb leader will help him get a reduction of the sentence or the quashing of his conviction, is not the only one who should be happy with the Appeals Chamber decision. The prosecution now has a unique opportunity to cross-examine the accused whose arrival in The Hague was awaited for long 13 years.

Karadzic will begin his evidence on 3 November 2008; it is expected to last three days.