THREATS, BOMBS AND CHITS IN HRTKOVCI

As his evidence continued at the trial of Vojislav Seselj, Aleksa Ejic, Serb from the village of Hrtkovci, gave several examples where his Croatian neighbors were pressured into moving out of their homes. Some of them received death threats, a bomb was thrown into the yard of a family, the witness said. Serb refugees would knock at their doors with chits saying that such and such a house was intended for a ’swap’ 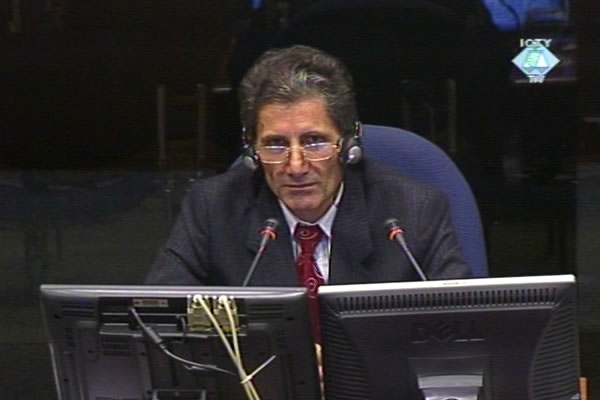 Aleksa Ejic, witness in the Seselj trial
In his examination-in chief at the trial of Vojislav Seselj, Aleksa Ejic, a native of Hrtkovci, described the atmosphere of fear created in 1992 for the non-Serb population of the village in Vojvodina. He talked about several cases of pressure being exerted on them. When the conflict broke out in 1991, just a few Croats left Hrtkovci, Ejic contends. Most of them – about 700, as alleged by the prosecution – left because of threats or in fear after they saw the most eminent Croat villagers left the village.

The witness listed several incidents that happened after the Serbian Radical Party rally in Hrtkovci on 6 May 1992. In his speech, the accused Seselj called for the implementation of the principle of reciprocity. Croats should be taken to the border by bus; from there they could ’continue on foot to their beautiful homeland’. In Ejic’s words, a local Croat Marko Fumic was attacked and received death threats. However, the witness discussed this in more details in closed session. Marko Fumic and his brother later moved out to Croatia together with their families. The Tkalac family did the same after a bomb was thrown in their yard.

As he continued his testimony about the atmosphere of fear in Hrtkovci Ejic said that two unknown ladies came to his door once; they had a piece of paper and told him that Ostoja Sibincic had indicated Ejic’s house was ’designated for swap’. The prosecutor contends Sibincic was the ringleader of the campaign to pressure Croats into leaving. When Ejic told the ladies that he was a Serb, they apologized and left. Similar things happened to others, but mostly to the non-Serb villagers of Hrtkovci. Many of them bowed to pressure and reluctantly agreed to swap their property with Serb refugees from Croatia.

In the beginning of his cross-examination, the accused Seselj attempted to blame the pressure against non-Serbs from the village of Hrtkovci on the Serbian Renewal Movement (SPO), the party headed by his political opponent Vuk Draskovic. Seselj noted that Ostoja Sibincic, member of the SRS and Seselj’s collaborator as alleged by the prosecution, was in fact the first president of the Serbian Renewal Party in the village of Hrtkovci. Ejic explained that Sibicnic headed the local SPO chapter for only a month in 1991. He was later removed from office, and as far as Ejic knows, he became a member of the SRS only in late 2007 or early 2008.

In an effort to challenge the witness’s allegation that the Serbian Radicals were linked with the regime of Slobodan Milosevic, Seselj noted that he was arrested four times in 1995. Unlike him, Vuk Draskovic was arrested only twice. ’You worked together with the regime, and you did not spend a long time in prison. You were not abused either, unlike Mr. Draskovic’, Ejic replied.