Leader of the Serbian Radical Party denies he and his party took part in creating an atmosphere of fear in which Croats decided to evacuate from the village of Hrtkovci. Seselj claims that he was set up by a ’conspiracy group’ headed by Serbian non-nationalist politicians Nenad Canak and Vesna Pesic 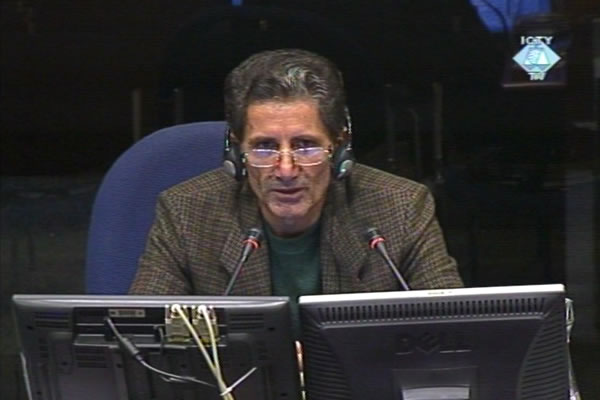 Aleksa Ejic, witness in the Seselj trial
In the second day of the cross-examination of Aleksa Ejic, the Serbian Radical Party leader Vojislav Seselj accused a ’conspiracy group’ of non-nationalist politicians for the exodus of Croats from the village of Hrtkovci in Vojvodina. The accused contends the ’conspirators’ persuaded the Croats to move out of Hrtkovci and then set up a media campaign blaming the exodus on him and the Serbian Radical Party.

In a part of his cross-examination that was rather rhetorical Seselj accused Vesna Pesic, who was at that time the president of the Civic Alliance of Serbia, of telling Branimir Vuksanic, a respected medical doctor from Hrtkovci, that his name was on the expulsion list and that he should leave. The conspiracy was complete, the accused maintained, when Nenad Canak got the media to blame the Serbian Radical Party for the exodus of Croats and for the pressure campaign that culminated in late June 1992 with the murder of Mijat Stefanac.

Ejic confirmed that he asked Nenad Canak for help after Stefanac was killed and that subsequently the media focused more on the events in the village of Hrtkovci. However, as he put it, it was not a campaign against the Radicals but an effort to ’keep the public informed’. In his view, Dr Vuksanic was forced to swap his house with a refugee Serb family from the outskirts of Zagreb. Vuksanic received threatening letters and at work people would tell him they ’didn’t want to be treated by an Ustasha’.

When Seselj asked the witness if he had ever heard Seselj or anybody from the SRS to call for the abuse and beating of Croats or blowing up their estates, the witness admitted that he never heard any such calls made publicly; he assumed it was done covertly. Denying he took part in exerting pressure on the non-Serb population in Vojvodina in 1992, the accused noted that he and other Radicals promised they would provide addresses of local Croats to Serb refugees where they could move in, but that they would do it only after they come into power, not before that. ’Yes, but they interpreted it as if they could do it even before you came into power’, Ejic replied tersely.

The presiding judge asked the witness about the situation in Hrtkovci today. Ejic told him that it was more or less normal; among other things this could be seen from the fact that the local Serbian Radical Party is a fringe party today.