Vojislav Seselj accuses the prosecution witness first of being ‘an informer of the Serbian state security service’, then that he joined the HOS, a terrorist paramilitary formation in Croatia, and finally that his father was an Ustasha in World War II. The prosecutor objects to this attempt to ‘besmirch’ and ‘intimidate’ the witness but the judges do nothing 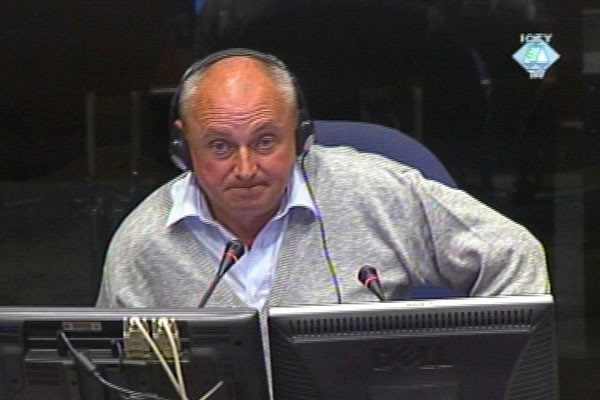 Franjo Baricevic, witness in the Vojislav Seselj trial
Yesterday, the accused Vojislav Seselj suggested that the Croatian intelligence service had prepped the prosecution witness Franjo Baricevic. Today he added new accusations to his list. The witness was ‘an informer of the Serbian state security service’, Seselj claimed, after arriving in Croatia, he joined the HOS, a terrorist paramilitary formation headed by Dobroslav Paraga and his father was an Ustasha in World War II. The witness rejected the allegations with indignation. The judges, however, didn’t react to Seselj’s peculiar cross-examination style despite the prosecutor’s objections to the attempts to ‘besmirch’ and ‘intimidate the witness’.

In his evidence yesterday, Baricevic said that he moved from the village of Hrtkovci in Vojvodina in May 1992. Before that, Seselj attended a Serbian Radical Party rally, read out a list of eminent local Croats and told them to leave Serbia. The witness then went to the village of Jaksic near Slavonska Pozega.

In the course of his cross-examination, the accused quoted from a statement allegedly given to Seselj’s investigators by Desanka Milovanovic who swapped houses with Baricevic. In her statement she says that only ’rich Croats’ remained in Hrtkovci while poor Croats swapped property ‘for material gain’. This is what Baricevic did, Seselj concluded, when he signed a contract on the property exchange: he got a new house, a large estate and new agricultural machinery in exchange for old movable property and real estate he left behind in Hrtkovci. The witness denied this allegation, saying that he got a burned-down house and barn, a 1969 tractor and a field in Jaksic in exchange for the two houses, estate and agricultural machinery in Hrtkovci. ‘I took what was offered because I stood to lose everything’, the witness said.

The trial of the Serbian Radical Party leader continued with the evidence of a protected witness, a Croat who moved out of Hrtkovci in 1992, swapping his property with a Croatian Serb.

In a summary of his statement read in the court by the prosecutor, the witness described how the climate in Hrtkovci changed after the Serbian Radical Party rally in May 1992; at the rally Seselj read out a list of names of eminent Croats, telling them to leave ‘with plastic bags’. ‘Children from mixed marriages should be killed’, Seselj went on to say, the witness stressed. The witness alleges that Croats received threats they would be killed if they didn’t move out of their houses. The police protected the perpetrators instead of the local Croats. After the murder of the witness’s uncle in June 1992, police check-points were set up in Hrtkovci and the situation improved a bit. The witness nevertheless decided to leave because ’the police can protect you in the village, but not in the field’.

Seselj refused to cross-examine the witness and his statement was admitted into evidence. The trial of the Serbian Radical Party continues next week with the evidence of Ewa Tabeau, prosecution demography expert.