In her expert report about the out-migration of Croats and other non-Serbs from the village of Hrtkovci in 1992, demographer Ewa Tabeau concludes that in some ten years, the number of Croats and other non-Serbs in the village in Vojvodina dropped by 76%; the Serb population increased five times in the same period. Will Vojislav Seselj have to face contempt of court charges? 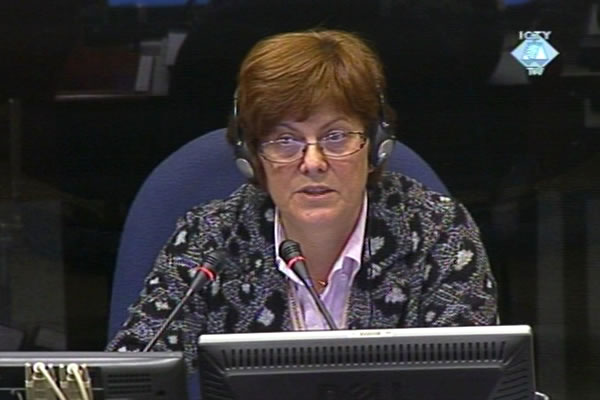 Ewa Tabeau, witness in the Seselj trial
In 1991 1,000 Croats lived in the village of Hrtkovci. By 2002, there were only 256 of them left. At the same time, the number of Serbs in what used to be a multiethnic village in Vojvodina rose from 500 to 2,400. Prosecution demographic expert Ewa Tabeau concluded this in her report on ‘the out migration of the Croats and other non-Serbs from Hrtkovci’ she drafted for the trial of Vojislav Seselj, Serbian Radical Party leader. The report covers the period from May to August 1992, although it contains isolated data related to migrations before and after that period.

In her research of the changes in the demographic structure of the village of Hrtkovci, Tabeau used a list with the names of 110 refugees she obtained from the Croatian authorities. She also used a list of more than 280 families expelled from the village, published in the book How My People Died by former parish priest Marko Kljaic. She also consulted the Catholic parish birth, baptism and wedding records.

In her comparison of the census of 1991 and of 2002, Tabeau noted that the number of Croats and other non-Serbs dropped by about 76%, while the Serb population increased almost five times. Tabeau found that such a significant growth in the number of Serbs and the decrease of the non-Serb population could not be due to ‘natural causes’; there must have been a ‘force contributing to the migration’, she added. According to the prosecution, the migration was prompted by Vojislav Seselj. On 6 May 1992, as alleged in the indictment, Seselj attended a rally in the village of Hrtkovci and called on the most prominent Croats to leave the village. After that, Seselj’s followers launched a campaign of terror and persecution of the non-Serb population.

Seselj contested the findings in the expert report, claiming that there ‘is not a single Croat from Hrtkovci who could be called a refugee’. In Seselj’s view, a refugee is a person ‘fleeing before real or imagined danger’, leaving all their property behind. Such persons, Seselj said, ‘have no time to draw contracts, to register them in court and organize the move’. Since Croats from Hrtkovci swapped their property with Serbs from Croatia, Seselj noted, the swaps were voluntary; the Croats left the village of Hrtkovci knowing what they were doing. The prosecution witnesses testifying about the events in Hrtkovci all claimed that they ‘took what they were offered’ because they didn’t want to ‘be left without anything’. As they put it, Serbs came to Hrtkovci with the addresses of their homes in Croatia, demanding that they be allowed to move into the homes of Croats in Hrtkovci.

Seselj also contends that Croats and other non-Serbs from Hrtkovci were not expelled because ‘no force was used against them, the army didn’t escort them to the border at gunpoint and they were not given an ultimatum to leave the country’. Seselj will continue his cross-examination of demographer Ewa Tabeau tomorrow morning.

In the beginning of the hearing today, presiding judge Antonetti said he had decided to recuse himself from the Trial Chamber assigned to hear the cases on contempt of court charges. This was, as he said, his ‘personal decision’. Although it was not expressly stated whether the proceedings against Seselj would be instituted, based on what the judge said the cause could be Seselj’s book The Hrtkovci Affair in which he disclosed names of protected prosecution witnesses.

As Judge Antonetti said, he didn’t want Vojislav Seselj's possible conviction of contempt of court to influence his impartiality in the current Seselj’s trial. Judge Antonetti believes Vojislav Seselj’s trial might continue simultaneously with the contempt of court proceedings against Seselj and/or some of his legal advisors for alleged attempts to intimidate witnesses.