NO PROTECTIVE MEASURES FOR SESELJ WITNESS

When he learned that almost half of his village already knew that he would be protected witness of the prosecution at the trial of Vojislav Seselj, Vojislav Ejic renounced the granted measures of identity and image protection. He gives evidence on the events in the village of Hrtkovci in Vojvodina following the visit of the Serbian Radical Party leader in May 1992. 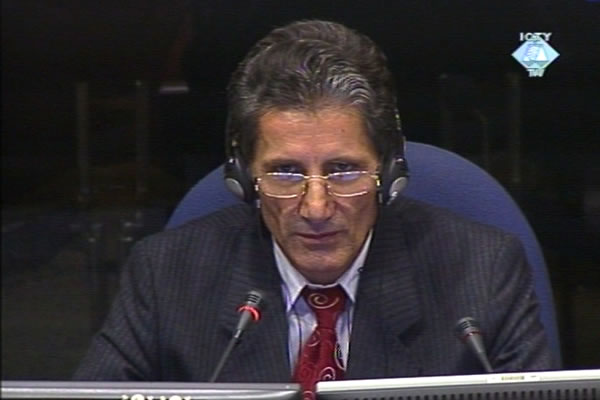 Aleksa Ejic, witness in the Vojislav Seselj trial
’First I wanted to be a protected witness. I changed my mind when I realized that half of my village knew I would testify’, Aleksa Ejic, farmer from the village of Hrtkovci in Vojvodina, said today explaining why he decided to forgo the protective measures for his testimony at the trial of Vojislav Seselj. Neither the judges nor the prosecution cared to ask him how it was possible for half of his village to know he would be testifying if his name was kept under the Tribunal’s seal. Ejic first talked about the contacts he had over the past few last years with Seselj’s known and unknown supporters.

The witness said that at the time his identity was still protected he received threats from unknown men in the street; they told him to ‘mind where he will return to after the testimony’. Ejic was also repeatedly called by persons from the Serbian Radical Party. He was first offered to become a defense witness and renounce the statements he gave to the OTP investigators. The offer went on: he could be put on Seselj’s party ticket at the local elections and his unemployed daughter would get a job. Ejic kindly declined all offers. After he came to The Hague, his daughter told him that Zeljko Dosen, local Serbian Radical Party leader, called and asked where he was. This caused Ejic ‘additional upset and concern’ but he remained firm in his intention to tell the truth the ‘international public has to hear’.

The truth according to Ejic is that after Seselj’s speech in Hrtkovci on 6 May 1992, Croats and Hungarians started leaving the village in haste under the pressure of Serb refugees from other republics and local Serbs headed by Ostoja Sibincic. Today, Sibincic is a member of the Serbian Radical Party. The witness attended the rally ‘out of curiosity’. At the rally, the accused called for the implementation of the ‘principle of reciprocity’: do unto the ‘non-loyal Croats’ as Tudjman did unto Serbs in Croatia, only ‘in a more humane way’. The humaneness, Seselj said at the rally, was to be reflected in the provision of buses to transport the Croats to the border. From there, he went on to say, they could ‘continue on foot to their beautiful homeland’.

At the rally, Ejic said, a local SRS leader read out the names of the so-called non-loyal Croats whose sons were allegedly in the Croatian army. Some of the most eminent villagers were among them. Ejic says they were the first to leave the village; and the others followed. The consequence was a drastic change in the ethnic composition of the village. Before the war, Ejic explained, Serbs made only 10% of the population; now they have 70%. At the same time, the number of Croats fell from 90% before the war to 30%. This was done under the guise of ‘property exchange’, where Croatian villagers were forced to swap their homes with the Serb refugees who had abandoned their houses in Croatia.

Serbian police was present during the rally and forcible departure of Croats but it never reacted. According to Ejic, this means that this was done with the tacit approval of the authorities. Despite the fact that he was in the opposition at the time, Seselj was ‘unwittingly used’ by Slobodan Milosevic’s regime to get rid of the non-Serb civilians.