DEFENSE: HERCEG BOSNA WAS NOT 'CROATIZED'

According to Borislav Puljic, member of the Crisis Staff in the Mostar municipality during the war, now testifying as Jadranko Prlic’s defense witness, the 'croatization' of the territory under its control was never among HVO’s objectives 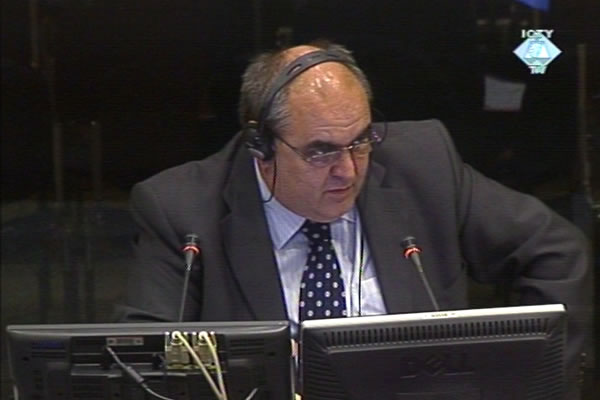 Borislav Puljic, defense witness for Jadranko Prlic
In his testimony in the defense of former Herceg Bosna prime minister Jadranko Prlic, witness Borislav Puljic says that the HVO HZ HB ‘never, ever’ had the ‘croatization’ of the territory under its control as its objective, contrary to what the prosecution is alleging. In fact, in the spring of 1992 the HVO took upon itself to defend the town against the attacks by the former JNA, protecting all of its inhabitants. During the war, Puljic was a member of the Crisis Staff of the Mostar municipality.

After the JNA attack in the spring of 1992, the witness recounted, Mostar was in total chaos. The town was overran by refugees and the municipal bodies gradually ceased to function. The Crisis Staff then decided to 'ask' the HVO to help; at the time, the HVO was the only organization that was still functional. The witness noted that there were not only Bosniaks but also Serbs in the HVO ranks, apart from Croats, adding that the ethnic background was not important at that time.

Stressing the fact that the HVO HZ HB 'never intended to ethnically cleanse the area under its control', Jadranko Prlic’s defense presented evidence that several Bosniaks were appointed to various posts in Mostar in 1992 and in early 1993. The witness was not aware of any case where Bosniaks had problems because of their ethic background. 'I never saw or heard anything of the sort. I would have known if it had happened', the witness maintained. It remained unclear whether this was the case only in the time leading up to conflict between the HVO and the BH Army, because in his evidence the witness mostly spoke about that period.

It is interesting to note that Puljic was one of the authors of the monograph Mostar '92 Urbicide. The accused Slobodan Praljak has often referred to this book in the course of the trial to support his claims that Eastern Mostar was shelled by the JNA, not by the HVO. The witness clarified that the aim of the book was to show the world the damage inflicted on the town by Serbs between 1992 and 1995. When Judge Antonetti asked him why the HVO opened fire at the Old Bridge during the Croat-Muslim conflict, the witness tersely replied that he was personally ‘sorry the bridge was targeted'.

After his examination-in chief, Puljic will be examined by the defense teams of Milivoj Petkovic, Bruno Stojic and Slobodan Praljak. When they finish, the prosecution will get a chance to cross-examine the witness.