CONTEMPT OF COURT BECAUSE OF ‘PRESSURE AND BLACKMAIL BY PROSECUTION’

Ljubisa Petkovic explained why he failed to comply with two subpoenas issued by the Trial Chamber to compel him to testify at the trial of Vojislav Seselj. He did so because of the ‘pressure, blackmail and intimidation on the part of the OTP’, leading him to decide to ‘cease all contacts with the investigators’ 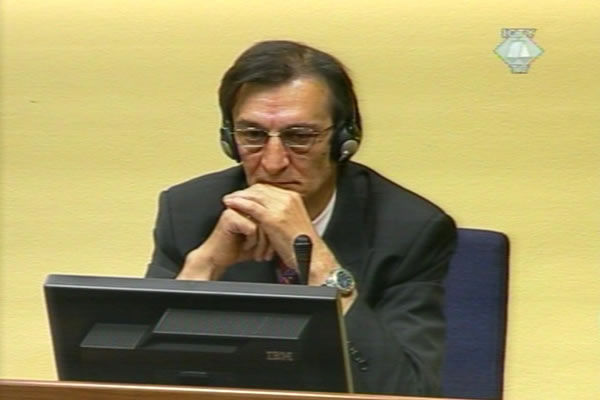 Ljubiša Petkovic in the courtroom
Former chief of the SRS War Staff Ljubisa Petkovic today testified at his own trial for contempt of court because he had failed to comply with a subpoena to testify at the Vojislav Seselj trial. In his defense, he talked about ‘the pressure, blackmail and intimidation by the OTP’. Today there were no OTP representatives in the courtroom to respond to those serious allegations, because Petkovic is tried on the indictment issued by the very same Trial Chamber that will rule in this case.

In his testimony in his own defense, Ljubisa Petkovic said that his first contacts with the OTP in The Hague occurred in 2002. He was first interviewed as a suspect. After that he was ‘available at all times’, as he put it, to the OTP investigators. He helped one of his acquaintances to get in touch with the investigators. The prosecution, on the other side, counted on Petkovic as a protected ‘insider witness’, slated to testify at the trial of Vojislav Seselj.

The turning point in Petkovic’s cooperation with the OTP investigators, he said today, occurred in the summer of 2006. Prosecutor Dan Saxon telephoned asking for an urgent meeting. They met in about half an hour. Saxon told him that from the Detention Unit Vojislav Seselj had sent through his wife to his advisers in Belgrade a list with the names of eight protected witnesses. His name was on the list. Saxon warned Petkovic that this could put him and his family at risk. Saxon advised him to hide and offered to move Petkovic’s family – wife and their six children – to Slovenia.

When he heard that, Petkovic noted, he was ‘rendered speechless’ and there was ‘chaos in his head’. In the days that followed, he ‘saw enemies everywhere’ and in the streets he would turn around to check if he was being followed. Then he started thinking ‘if this is really it’; he thought that the OTP might have come up with a plot to ‘kidnap his family and blame it on the Serbian Radical Party’.

Defense counsel Branislava Isailovic called Petkovic’s wife Ljiljana to the witness stand. She confirmed that the accused is the sole provider of the family and that his physical and mental health had deteriorated in the course of last year.

The defense counsel didn’t deny that Petkovic actually commit the offense he was charged with. However, she called on the Trial Chamber to acquit him. If, however, the Trial Chamber found Petkovic guilty, the defense counsel asked the judges to take into consideration Petkovic’s personal and family situation and the fact that he has spent the last three months in the UN Detention Unit’ when considering the appropriate penalty. Petkovic was not granted provisional release pending trial.