HARTMANN POSTPONES HER PLEA ON CONTEMPT OF COURT CHARGES

The judge was surprised that former OTP spokesperson decided not to enter her plea; he wondered ‘what the defense will gain with the postponement’ since ‘the accused has already publicly stated she is opposed to the proceedings’. It was the judge’s ‘assumption that she is challenging the indictment’. The defense insists on trial in open court and ‘the interest of the public to be informed how international justice works’ 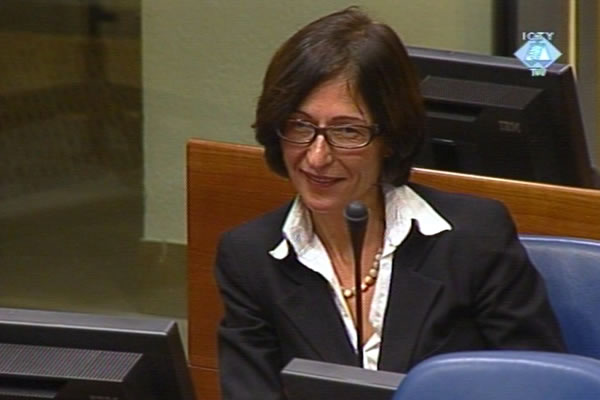 Florence Hartmann in the courtroom
Former OTP spokesperson Florence Hartmann today exercised her right not to enter a plea on the contempt of court charges filed against her because she published information about two confidential decisions of the Appeals Chamber. Hartmann’s defense counsel William Bourdon explained why she did that, noting that the ICTY Registry hasn’t yet reviewed the financial status of the accused and stressing that he is not certain he would continue to represent her if the Tribunal refused to cover the defense.

Florence Hartmann’s decision surprised Judge Carmel Agius who was the presiding judge at the hearing today; he wondered ‘what the defense intends to gain with the postponement’ after ‘the accused has already publicly stated she was opposed to the proceedings’; he assumed that she intended to challenge the indictment.

At the beginning of the hearing, defense counsel Bourdon demanded that the former OTP spokesperson be allowed not to sit in the dock, saying Florence Hartmann ‘might have committed an act that may be qualified as contempt of court’ but even if that was the case, her criminal responsibility was ‘marginal’ in comparison to the responsibility of the accused for crimes against humanity that are on trial before the Tribunal. Bourdon wanted Hartmann to sit closer to him on the defense bench and asked that the photos in the dock taken before the judges entered the courtroom by two Tribunal’s photographers not be made public, because those pictures served ‘to needlessly stigmatize her’.

Judge Agius disagreed with the defense claim that contempt of court was a ‘marginal offence’. However, he did allow the accused to sit behind her counsel, in the same bench and on same chair where Vojislav Seselj sits during his trial. Judge Agius however rejected the defense counsel’s request that pictures of Florence Hartmann in the dock not be published.

Despite their disagreement over the gravity of crime the accused is charged with, the judge told both parties that in contempt of court cases the time they had to file briefs might be reduced substantially, and that briefs might have to be much shorter. This means that the trial might start in early 2009. According to the judge, Florence Hartmann might be invited to enter her plea in two weeks instead of the usual 30 days. Reasons behind this rush were not specified.

During the 70-minute hearing, the judge never said what the confidential decisions of the Appeals Chamber were about. Florence Hartmann made those decisions public at pages 120 to 122 of her book, Peace and Punishment, and an article, Hidden vital documents on genocide, published on 21 January 2008 on the Bosnian Institute website. If the contest of the decisions is discussed at the trial, the judge said, it will be done in private session, and the public will not hear it.

Defense counsel Bourdon indicated he would insist on public hearings: these are key principles of freedom of speech, freedom of information and the interests of the public to know how international justice works, he contends.