In its closing argument, the defense calls for the acquittal of General Rasim Delic. The El Mujahid Detachment, the defense notes, reported to the Islamic Cultural Institute in Milan and to the terrorist organization Al-Qaeda. The detachment's relationship with the BH Army was one of ‘cooperation’ 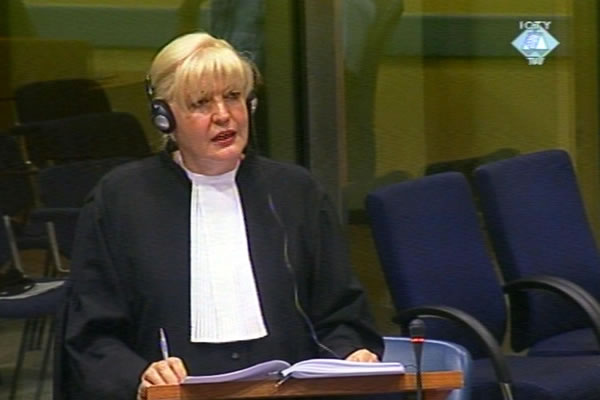 Vasvija Vidovic, defense council of Rasim Delic
'We do not expect an acquittal on the basis of factors that go beyond the framework of this case. The facts speak clearly in favor of it’, Vasvija Vidovic said as she began the closing arguments at the trial of the former commander of the BH Army General Staff, General Rasim Delic.

The evidence called at the trial, the defense counsel noted, showed that the prosecution case was 'unclear, unconvincing and unsubstantiated'. It was based on 'constructed facts and fabricated orders'. In Vidovic's view, the prosecution created a 'multicolored patchwork of different fabrics’ by using only parts that suited him from different documents ‘to make a senseless jigsaw puzzle’.

The Mujahideen 'operated like a gang, not respecting the Bosnian authorities; they followed orders of their superiors, disparaging the BH Army', the defense counsel stressed. They operated independently and their only relationship with the BH Army was one of ‘cooperation’.

Even if the detachment had been under the BH Army control, the defense counsel argued, the position of the detachment, purportedly subordinated to the 35th Division of the BH Army 3rd Corps, was 'too far removed' from the commander of the General Staff for him to receive reports on what the subordinate units did. The reports were kept back on lower levels of command and by the time Delic got the information, it was presented in general terms, the defense counsel said. Therefore, she concluded, Delic didn't know and could not have known about the crimes.