DID THE MUJAHIDEEN ‘TOOK OVER’ OR ‘KIDNAPPED’ PRISONERS

Izet Karahasanovic, former member of the BH Army 328th Brigade, confirmed the defense allegation that a group of some fifty Serbian prisoners captured in the village of Kesten on 10 September 1995 was ‘kidnapped’ by Arab fighters. He wasn’t able to determine what unit they belonged to because he didn’t know whether there were other groups of foreign fighters in that area apart from the El Mujahid Detachment 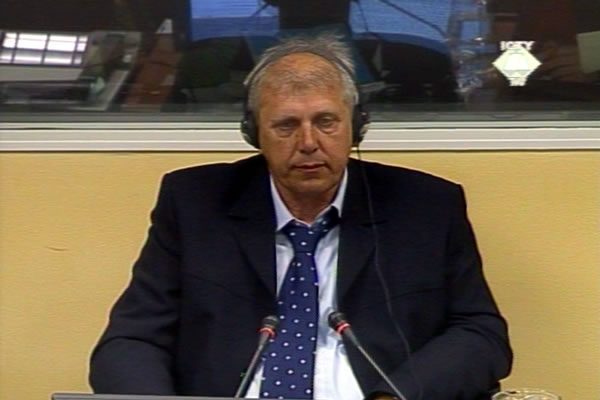 Izet Karahasanovic, defense witness for Rasim Delic
The defense of Rasim Delic, former commander of the BH Army General Staff, called Izet Karahasanovic, former member of the BH Army 328th Brigade, to give his evidence. Karahasanovic witnessed the events in the village of Kesten on 10 September 1995 when some fifty Serbian soldiers were captured at the Mount Ozren front line. According to the prosecution, the BH Army troops ‘handed over’ the prisoners to the El Mujahid Detachment. The prisoners went missing and are presumed dead. The defense is trying to prove that the prisoners were ‘kidnapped’ by some other group of foreign fighters who later took them away.

In early September 1995, in the wake of the BH Army Vozuca operations, Karahasanovic was appointed assistant commander of security with the 5th Battalion in the 328th Brigade. According to his evidence, on the day the operation was launched he was told that a large group of Serbian soldiers had been captured by one of his units. He went to the village of Kesten to take over the prisoners and write down their names. In his words, the unit that had captured them soon left and only he and a few other BH Army soldiers were left to guard the prisoners. Suddenly a group of some thirty Arab fighters arrived, catching them by surprise. They were ‘armed’, they yelled and threatened the witness and the other soldiers. Finally, they took over the captives and took them away.

According to the witness, he reported the ‘forcible kidnapping’ of the captives to his superiors, and provided their names on a list. However, he couldn’t explain why the combat report of the 328th Brigade notes that the members of the El Mujahid Detachment simply ‘took over’ the prisoners. The report signed by Fuad Zilkic, commander of the 328th Brigade, makes no mention of a kidnapping or forcible takeover of the prisoners. ‘In my report, I stated that the captives were taken away by force’, the witness said.

Several prosecution witnesses testified about the ‘kidnapping’ of some fifty Serbian captives in the village of Kesten on 10 September 1993 and the kidnapping of three women by a group of foreign fighters. One of them was Fuad Zilkic, commander of the 328th Brigade, and Karahasanovic’s immediate superior, Ahmet Sehic, commander of the 5th Battalion in that brigade.