BEYOND REASONABLE DOUBT OR FOUNDATIONS ON SAND?

Closing arguments have begun at the trial of Haradinaj, Balaj and Brahimaj. The prosecution believes it has proven beyond reasonable doubt that the accused are responsible for the persecution of civilians; the defense claims that the prosecution case "ultimately rests on foundations on sand" 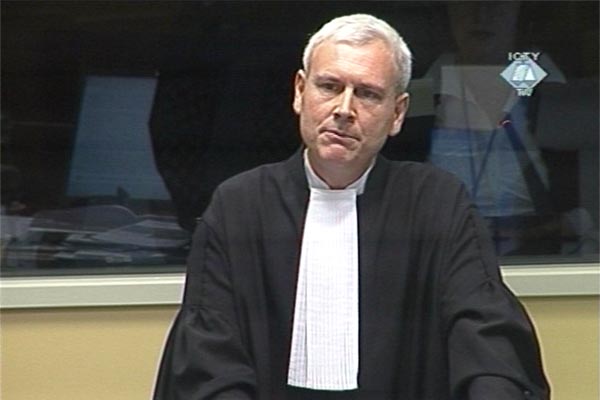 David Re, prosecutor in the trial of the three former KLA commanders
According to the prosecution, it has managed to prove beyond reasonable doubt that the accused are guilty on all counts in the indictment. The prosecution calls on the Trial Chamber to convict Ramush Haradinaj, Lahi Brahimaj and Idriz Balaj and sentence them to 25 years in prison for their role in the campaign of persecution and violence against those who opposed the KLA.

In his closing argument at the trial of the three former KLA commanders charged with crimes against Albanian, Serbian and Roma civilians in the summer of 1998, prosecutor David Re described the first accused Ramush Haradinaj as ‘a strong and charismatic personality, idolized by his followers. “God is in heaven, Ramush is on Earth”, as a prosecution witness put it. Haradinaj was the most powerful man in the Dukagjin zone. He personally appointed and replaced local KLA commanders, often without their consent. Haradinaj frequently visited the frontlines and nothing could happen without his approval. According to the prosecutor, his power in the area where the crimes alleged in the indictment were committed was absolute, not only in the military sphere, but also in civilian life. Haradinaj had the last word on everything: health care, registration of the newborn and the dead, registration of vehicles. He controlled the timber trade. Haradinaj banned all political activity and the sale of liquor in his zone: this applied both to the military personnel and civilians.

According to the prosecutor, the second accused Idriz Balaj, aka Toger, was ‘a very important member of Ramush Haradinaj’s headquarters in Glodjane who at the time served as his personal bodyguard’. He commanded the notorious ‘Black Eagles’, a KLA special unit. As the prosecutor described it, his task was to ‘discover, arrest and kill enemies’. The enemies were Serbian, Roma or Albanian civilians suspected of collaborating with Serbian authorities. The prosecutor concluded that Balaj had played ‘an important and brutal part in the persecution of civilians as part of the join criminal enterprise’.

The prosecutor contends that it has been proven beyond the reasonable doubt that the third accused Lahi Brahimaj set up the KLA prison center in Jablanica and was in charge of it. He himself committed crimes and encouraged other KLA members to perpetrate crimes against the prisoners thus aiding and abetting the joint criminal intent. As prosecutor Re emphasized, Brahimaj publicly advocated the persecution of persons suspected of being collaborationists or adversaries of the KLA. Brahimaj had ‘unlimited control over the fate of his captives’.

‘There are similarities’ in the case of the three former KLA commanders that point to a pattern in the selection and elimination of their victims. The victims were Serbian civilians who remained in the in Dukagjin area after the KLA established its control over the area, and the Albanian and Roma civilians accused of being Serbian spies or collaborationists. Their bodies – all with similar wounds and signs of abuse - were found in the Radonjic lake canal less than two kilometers from Ramush Haradinaj’s house. Of the thirty-one bodies discovered there, twenty had been shot to death, the prosecutor noted, adding that the defense didn’t contend this allegation.

[IMAGE]3182[/IMAGE]The defense does contend the allegation that they were victims of the KLA and that the accused had anything to do with their fate. Ben Emmerson, Haradinaj’s defense counsel, emphasized this at the beginning of his closing argument as the hearing drew to a close. According to Emmerson, when the judges "examine the evidence critically and methodically, it becomes clear that the entire edifice of inference that the prosecution has tried so painstakingly to build, ultimately rests on foundations on sand".

The defense teams of former KLA commanders will continue with their closing arguments tomorrow afternoon.