DEFENSE: HARADINAJ, BALAJ AND BRAHIMAJ ARE NOT GUILTY

There is no proof that the three accused personally took part in crimes, their defense claims. The prosecution failed to prove that the people under their control perpetrated the crimes. The defense ascribes the crimes to ’undisciplined village guards and unidentified individuals in turn controlled by unidentified persons" 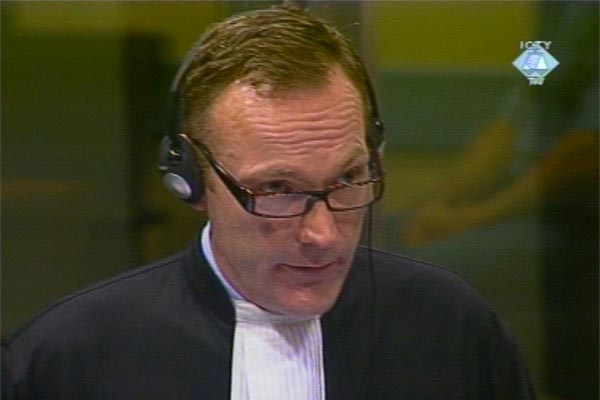 Ben Emmerson, defense attorney for Ramush Haradinaj
The defense counsel of the three former KLA commanders today called for the acquittal of their clients. In their opinion, the prosecution failed to prove beyond reasonable doubt the charges in the thirty-seven counts in the indictment. The three were charged with the murder of Albanian, Roma and Serbian civilians in the Kosovo Dukagjin area in the spring and summer of 1998. The prosecution did not prove that Ramush Haradinaj, Idriz Balaj and Lahi Brahimaj had personally taken part in the murders, arrests and torture of civilians. As the defense sees it, there was no joint criminal enterprise whose aim, as alleged by the prosecution, was to establish the KLA control over the Dukagjin area ’through the elimination of Serbian civilians and the prevention of actual or presumed collaboration of Albanians and Roma with Serbian authorities’.

Ben Emmerson, Ramush Haradinaj’s defense counsel, denied that his client had planned or perpetrated crimes he is charged with. He went on to deny that his client had any knowledge of the crimes yet failed to prevent the crimes and punish the perpetrators. If the crimes had been committed, the defense claims that the first accused didn’t have any control over the perpetrators. According to Emmerson, the attacks against civilians in the Dukagjin area were committed by ’unorganized, undisciplined and unauthorized village guards and unknown individuals who were in turn controlled by unidentified persons’. Haradinaj didn’t approve of such acts, the defense counsel claims, as can be seen from his alleged efforts to obtain the release of unlawfully detained civilians in a few cases.

The defense contends that the prosecution relied on shaky evidence, above all that obtained from the Serbian police and State Security service. In its view, this evidence is founded on police assumptions not substantiated by facts and on statements given by Albanians who had been ‘blackmailed and beaten’ by the Serbian police until they agreed to sign documents that had already been drafted.

[IMAGE]3187[/IMAGE]In his effort to prove that the joint criminal enterprise didn’t exist, defense counsel Emmerson noted that the KLA could not be blamed for the bodies found in the Radonjic Lake canal in September 1998 beyond reasonable doubt. ‘The KLA’s control over the canal is a myth’, he said, emphasizing the evidence about the presence of Serbian forces in the canal area before the police discovered bodies. It was possible that the Interior Ministry planted the bodies there, Emmerson said, adding that ‘it wouldn’t have been the first time’ that the Serbian police had moved bodies from one location to another.

[IMAGE]3190[/IMAGE]Idriz Balaj’s defense counsel obviously felt that Haradinaj’s defense had done a good job challenging the joint criminal enterprise allegations, and went on to focus on denying Balaj’s involvement in specific crimes. Balaj’s US defense attorney Gregor Guy-Smith contends the prosecution ’relied only on rumors’ about Balaj’s cruelty and brutality presented by prosecution witnesses. Guy-Smith went on to point to the errors by the OTP investigators who failed to comply with the rules when they showed the photo spreads to the prosecution witnesses who subsequently identified Balaj.

[IMAGE]3191[/IMAGE]Finally, the defense counsel of the third accused Lahi Brahimaj claims that the prosecution didn’t call enough evidence to prove that Brahimaj was superior to persons that took part in the torture and murder of civilians held in the Jablanica prison. According to the defense, Brahimaj was not the commander of the Jablanica prison: he played ’an essentially different role’. The defense failed to specify what role that was. There is no evidence, defense counsel said, that Brahimaj was in Jablanica in the time relevant for the indictment, or indeed that he was in any other place or any other position within the KLA. At the end of his closing argument, Brahimaj’s defense counsel first mistakenly called for the conviction of his client, only to correct himself and ask for his acquittal.