THE IMPORTANCE OF BEING A GODFATHER

Milan Kotur, retired VJ colonel, claims that the term ’Joint command of the army and police’ was used in a wrong sense. The mistake was not corrected so as not to offend the person who had coined the term. According to the prosecution, the existence of this body is an indication that ethnic cleansing was carried out in Kosovo, and that it was orchestrated by Slobodan Milosevic and his close associates 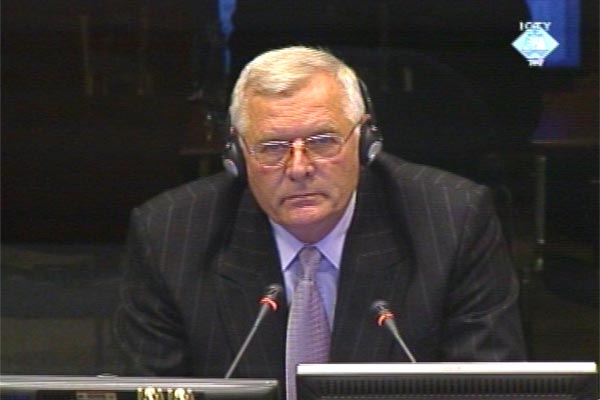 Milan Kotur, defense witness for Vladimira Lazarevic
Testifying as General Vladimir Lazarevic’s defense witness at the trial of the Kosovo Six, retired colonel Milan Kotur repeated what the previous defense witnesses had said: there was no body called ‘the Joint command of the army and the police for Kosovo’. The term was used in military documents to designate that the actions were to be carried out jointly by the army and the police, which retained their separate chains of commands. The prosecution alleges that this body was Slobodan Milosevic’s instrument for the ethnic cleansing of Kosovo in 1999. The accused Nikola Sainovic, Nebojsa Pavkovic, Vladimir Lazarevic and Nebojsa Pavkovic were allegedly among its members.

Kotur tried to explain why this term, ‘joint command’ can be found in the Pristina Corps documents from summer of 1998 to April 1999, despite the fact that it was illogical. In Serbia, customs dictate that ‘the godfather’s word must be respected’, Kotur said. It was also customary for the godfather to name his godchild. In the case of the ‘joint command’, no one wanted to get on the wrong side of the person who named it, and the name continued to exist in documents for almost a year. The witness corroborated his clever ideas with a number of proverbs, such as,’ God is in heaven, godfather is on earth’, and ‘once born, never put to right’.

In the end, it was not quite clear from Kotur’s evidence who the ‘godfather on earth’ might be, but one could make an educated guess. Kotur heard the term ’joint command’ in July 1998 from Colonel Djakovic, one of Nebojsa Pavkovic’s closest associates. ‘I couldn’t say for sure that Pavkovic himself coined the term’, Kotur said, hedging his statements.

Following the treatise on the role of godfathers, the witness spoke about the story about his friendship with British colonel Richard Ciaglinski. In early 1999, when Kotur was the liaison officer in Pristina Corps, Ciaglinski was his opposite number in the Kosovo Verification Mission. Testifying for the prosecution in November 2006, the British colonel described how on the eve of NATO air strikes Kotur had told him ‘as a trusted colleague’ about the plan to ‘eliminate the KLA and remove the Albanians from Kosovo for good’. Kotur denied Ciaglinski’s allegations when he testified at the trial of Slobodan Milosevic in January 2006. Today he did the same, saying he ‘never heard of any such plan for the expulsion of Albanians from Kosovo and couldn’t have said anything of the sort’.