GENERAL LAZAREVIC WAS ’PARAGON OF HUMANITY’

Describing General Vladimir Lazarevic’s character, VJ lieutenant-colonel Vladimir Marinkovic said that Lazarevic ‘was and remains his ideal for his military career and humanity’. The Kosovo Six trial continues on 16 January 2008 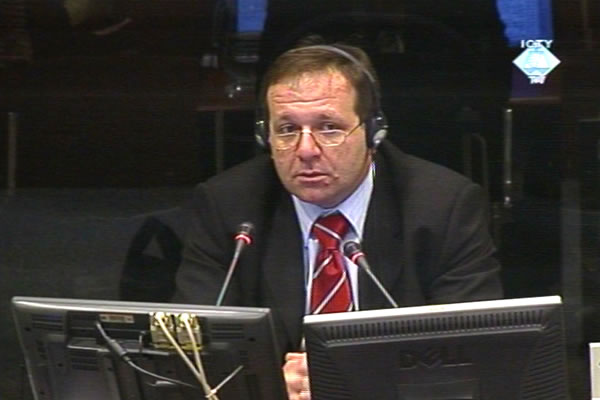 Vladimir Marinkovic, defense witness for Vladimir Lazarevic
The last witness to take the stand this year at the trial of the six former Serbian politicians and generals charged with Kosovo crimes was Vladimir Marinkovic, former security chief in the VJ 15th Armored Brigade. Testifying in defense of General Vladimir Lazarevic, Marinkovic said that all those who committed a crime from his brigade - were handed over to military justice system. They were mainly tried for looting, but Marinkovic described a failed attempt to investigate the crime scene were an Albanian family was murdered.

Describing the character of the accused Lazarevic, Marinkovic said that he ’was and remains his ideal for his military career and humanity’. This was because Lazarevic didn’t spare his own family, never asking for any special treatment for them. During the NATO campaign, General Lazarevic’s two sons served in the Pristina Corps and ‘had the same status as the other troops’.