The prosecutor showed a series of VJ documents in an effort to prove that local Kosovo Serbs who were involved in crimes against Albanians in 1999, as the prosecution witnesses claimed, were under the military command. The documents are orders issued to the ’armed non-Serb population’. The witness, former commander of the 125th Brigade, claims the orders are mere ’empty words’ that have never been implemented in the field 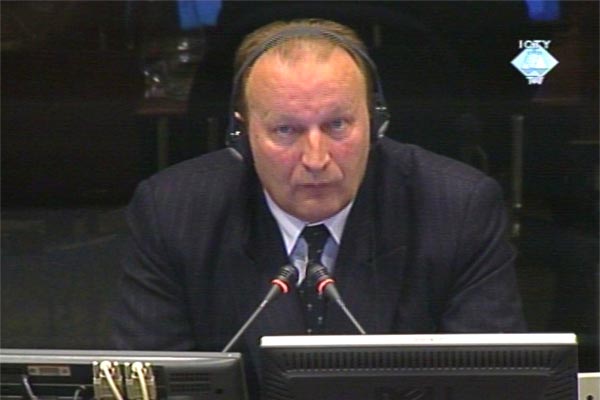 Dragan Zivanovic, defense witness for Vladimira Lazarevic
At the beginning of the cross-examination of Dragan Zivanovic, Vladimir Lazarevic’s defense witness and former commander of the 125th Brigade, the prosecutor contested Zivanovic’s claim that there was no joint command of the army and the police on Kosovo. According to the indictment, this informal body was Slobodan Milosevic's tool for the implementation of the ethnic cleansing policy in Kosovo in 1999. It comprised dozens of politicians and officers; four of the accused: Nikola Sainovic, Nebojska Pavkovic, Sreten Lukic and Vladimir Lazarevic, were among the members.

The prosecutor showed the witness a series of orders issued by the Joint Command to his brigade. Zivanovic said that he was aware of them. When he received them, he himself was not sure what kind of a body that was. The first document arrived in the spring of 1998 and he immediately called the Pristina Corps command for an explanation. An operations officer told him ‘not to worry’, because the order was a Corps document. The term ‘Joint Command’ was introduced, he said, because the document referred to joint actions of the VJ and the Interior Ministry units that had separate chains of command. This clarification laid to rest Zivanovic’s concerns. When the presiding judge asked him whether he thought it was illogical to use the term ‘joint command’ in that sense, Zivanovic agreed, but said that it didn’t interfere with the ‘principle of single command’ in the two separate chains of command, in the army and the police.

Several eyewitnesses who testified for the prosecution spoke of local Serbs taking part in the murders and expulsion of Albanian civilians in the spring of 1999. The prosecution is trying to prove that they were under the army’s control and that the term ‘armed non-Albanian population’ in military documents is a codeword for them. After the prosecutor showed a number of such documents where tasks are assigned to ‘armed non-Albanian population’, Zivanovic said that those were just ‘empty words’, never implemented in practice.

As today’s session drew to a close, the prosecutor tried to discredit the witness, asking whether he was under investigation for his alleged participation in the network trying to provide shelter for Ratko Mladic, wanted by the ICTY. Zivanovic confirmed proceedings were underway before the District Court in Belgrade, adding that his name was put on the suspects’ list by mistake in all likelihood, because he was confused with Milenko Zivanovic, former VRS Drina Corps commander and one of Mladic’s closest wartime associates.