After the presiding judge warned the accused general that his evidence was a ’long journey through documents’ about events in general terms rather than an account of the specific events in the field, the accused testifying in his own defense mentioned one of the incidents listed in the indictment: the killing of several hundred Albanians in the villages of Korenica and Meja. He offered an alibi in his defense 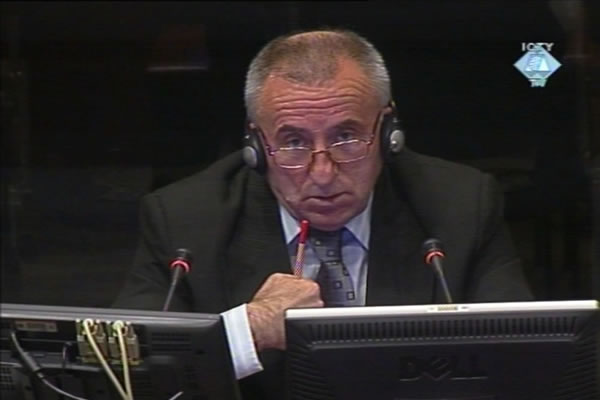 Vladimir Lazarevic testifying in his defense
As his testimony in his own defense continues, General Lazarevic denies that he did nothing to prevent the crimes against Albanian civilians in 1999, as alleged in the indictment. He pointed to a series of orders he issued as the commander of Pristina Corps, demanding that his subordinate units comply with the provisions of international humanitarian law. Noting that there were many such orders, judge Chowhan asked Lazarevic if this meant that the subordinate units didn’t comply with them, and they therefore had to be repeated. Lazarevic denied this, explaining that he often issued identical orders for ‘preventive reasons’.

The accused general did admit that there had been ’isolated cases of improper treatment of civilians’ but denied they were systematic. During the war in Kosovo, military judicial bodies filed 245 criminal reports against such ’undisciplined individuals’, he said. Twenty of those reports concerned murder. The prosecution has charged Lazarevic and five other former Serbian officials with the killing of almost 1,000 and forcible transfer of 800,000 Albanian civilians.

Lazarevic denies any knowledge of a plan for the expulsion of Albanian refugees. He asked his subordinates to take care of them and to ‘help the police’ working on their return to their homes, he said, repeating that the Albanian civilians left their homes in fear of NATO. Their exodus was organized by the KLA and was not due to any pressure of the army and police.

As Lazarevic’s claims were mainly substantiated by orders and other documents the judge warned the defense counsel that his evidence was turning into a ‘voyage through documents’ about events in general terms, rather than an account of specific events in the indictment. The defense then raised the issue of the role the accused general played in the attack on the villages of Korenica and Meja. Several hundred civilians were killed there on 27 and 28 April 1999.

In his evidence in August 2006, Nik Peraj, who had served as a VJ captain in a Pristina Corps brigade in 1999, said that he had personally seen Lazarevic at the forward command post in Djakovica charting the course of the operation in Korenica and Meja on a map. The accused general claims that he was not at his command post at that time. He was in Pristina attending a ‘modest celebration’ of the Statehood Day. The next day he was involved with the move of the 3rd Army forward command post from the outskirts of Pristina to the town centre.

Lazarevic finished his five-day testimony today. If the defense counsels of other accused have no further questions, he will be cross-examined tomorrow by the prosecution.