The defense of the former 3rd Army commander called just seven witnesses and rested its case this week after the accused decided not to testify in his own defense. Ljubisa Stojmirovic, 3rd Army chief of staff, testified as the last defense witness 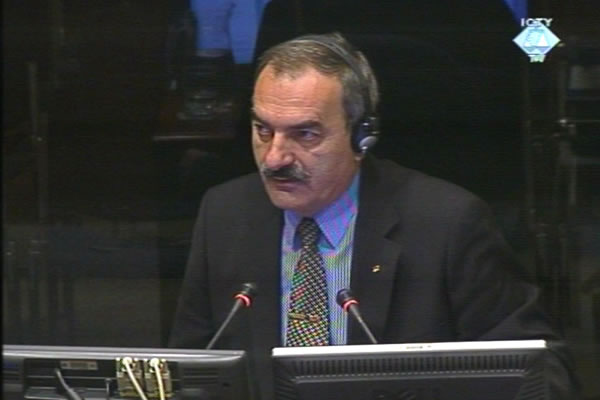 Ljubiša Stojmirovic, defense witness for Nebojsa Pavkovic
Ljubisa Stojmirovic, 3rd Army chief of staff Army, testified today as the last defense witness called by General Nebojsa Pavkovic. Pavkovic is one of the six former Serbian officials charged with crimes against Kosovo Albanians in 1999. The defense called just half of witness on its short list comprising fourteen retired VJ officers. Pavkovic himself also decided not to testify in his own defense.

Ljubisa Stojmirovic, a retired general, claims that his commander followed the instructions from the General Staff in order to defend the country against the NATO attacks. According to him, Pavkovic performed his military tasks but never forgot the safety of civilians. He repeatedly ordered his subordinates to observe the provisions of the international law of war. The defense tendered some of those documents into evidence.

According to the prosecution, Pavkovic’s order of 7 May 1999 gives a much better idea of how civilians were taken care of. In this order, he demands that the subordinate units ’secure the movement of the Siptar population’. Stojmirovic denied that ‘securing the movement’ meant shepherding the refugees towards the border. The prosecutor wanted to know why this order speaks only of Albanian civilians and not of civilians in general. The witness explained that this was because Albanians were the largest ethnic group in Kosovo.

In an effort to prove the allegation of the indictment that Pavkovic covered up the crimes, the prosecutor showed the minutes from the General Staff collegium meeting of 18 March 1999, where Aleksandar Dimitrijevic, chief of the military intelligence service, complained about the problems in the reporting about developments in Kosovo. Dimitrijevic said that ’the Ministry of Interior and the VJ are conducting clean-up operations’ in Kosovo while the 3rd Army combat reports state only, ’they attacked us and we returned fire’. Dimitrijevic concludes that ’something is wrong with these reports’. The witness answered that he didn’t remember that any complaints were made about the 3rd Army reports. Dimitrijevic was removed from the post of the chief of the military intelligence service on Milosevic’s orders on the day the NATO campaign started. It was only five days after he spoke at the General Staff collegium meeting.

Because Pavkovic’s defense called less witnesses than anticipated, and because Ojdanic had decided not to testify, Vladimir Lazarevic’s turn to present his case came before it was planned. The defense asked for the trial to be adjourned for a week in order to be able to prepare for its case, and the Trial Chamber granted the request. The trial continues on Tuesday, 6 November 2007.