Nebojsa Pavkovic’s defense didn’t present the opening statement, but it did indicate during the testimony of its first two witnesses that it would prove Pavkovic’s innocence by arguing that the Albanians left Kosovo mainly in fear of NATO, that there had been no Joint Command and that the accused general tried to remove the perpetrators of crimes from the VJ 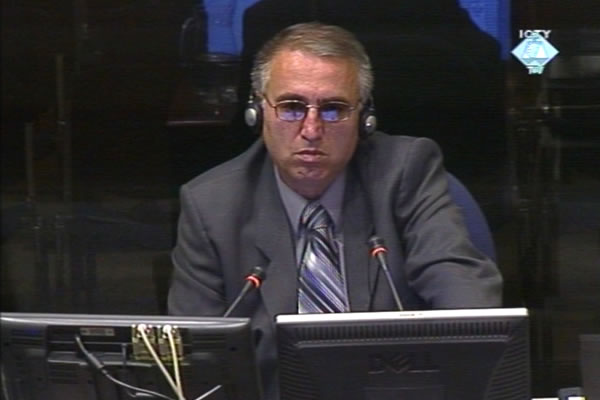 Velimir Obradovic, defense witness for Nebojsa Pavkovic
The defense of Nebojsa Pavkovic, former commander of the 3rd Army, called two witnesses on the first day of its case. Colonel Velimir Obradovic was chief of the Operations Center at the command post in Nis during the war. The second witness, retired general Mirko Starcevic, was in Kosovo together with Pavkovic as his assistant for morale.

Although the defense of General Pavkovic didn’t use its right to present its opening statement, during the evidence given by the first witness it was indicated that it would be proving, among other things, that Albanians fled Kosovo during the NATO campaign in fear of bombing and not because of any military or police pressure. In an effort to prove that civilians fled their homes not only in Kosovo but in the whole of Serbia, Obradovic said that a large number of the residents of Nis left their homes during the NATO campaign. However, when the prosecutor asked him if they fled across the border like the Albanian civilians, the witness said that they mainly sought shelter in the suburban areas.

Like the defense of Sainovic and Ojdanic, Nebojsa Pavkovic’s defense is trying to prove that the joint military and police command for Kosovo was not a command body but a body in charge of ’coordinating the operation of security forces’. According to the indictment against the six former Serbian officials, the Joint Command – which included Pavkovic – was an informal body through which Milosevic and the Serbian political leadership actually orchestrated the war in Kosovo and implemented the plan for the expulsion of approximately 800,000 Albanian civilians.

Colonel Obradovic admitted that such a body existed. The name ‘joint command’ was formulated rather awkwardly, he added. ‘This name was given by a daddy, he said, ‘but I don’t know why’, the witness said, adding that the high-ranking officers used the expression ‘joint command’ in ‘a pejorative sense’. As he claims that the this body existed only from July to October 1998, the prosecutor asked him to read aloud a part of the 3rd Army combat report from 29 April 1999, where mention is made of ‘tasks being accomplished in the spirit of the order of the Joint Command’. This was the last question the prosecutor asked.

[IMAGE]3033[/IMAGE]Mirko Starcevic, the second witness testifying in Pavkovic’s defense, said that during the whole time of the war in Kosovo the accused had been committed to comply with international laws of war. To corroborate this, he said that Pavkovic used to say ‘humanity first, responsibility second’. In an effort to prove that this was not just empty words, the witness said that General Pavkovic removed the commander of the 125th Motorized Brigade and fifteen officers after hearing that a man by the name of Zmajevic and a group of soldiers from this unit had committed a crime in the village of Zegra: five civilians had been killed. Pavkovic allegedly said, ‘Don’t let me kill the criminal, let him be punished by the court and not by me’. Starcevic wasn’t sure if the court really had convicted the perpetrators of this crime, or if the officers who had been removed from their posts in the 125th brigade had ever been tried.