ON THE ORDERS OF A NON-EXISTENT COMMAND

The testimony of the former chief of the 1st Operations Administration in the VJ General Staff is marked by the dispute over a document, signed by Ojdanic, where mention is made of an order of the Joint Command of the military and police for Kosovo. The defense claims this body didn’t exist while the prosecutor alleges at least four of the six accused were actually members 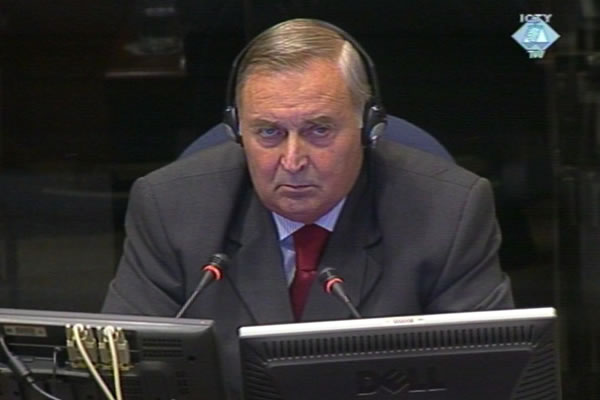 Djordje Curcin, defense witness for Dragoljub Ojdanic
A document the prosecution relies on to prove that the Joint Command of the military and police for Kosovo existed is entitled Suggestions of the Supreme Command Staff. The document was drafted on the basis of an order of the Joint Command of 15 April 1999. Two days later, the document, now bearing General Ojdanic’s signature was sent to the 3rd Army Command, The defense counsel claim their clients were unaware that such a body existed, particularly during the NATO air strikes. To support its claims, Ojdanic’s defense lawyer called as its witness the wartime chief of the 1st Administration in the VJ General Staff, Djordje Curcin. He took part in the drafting of the Suggestions.

Curcin claims that on 17 April Ojdanic met Nebojsa Pavkovic, 3rd Army commander, at the command post in Belgrade. Pavkovic was on his way back from a meeting with Slobodan Milosevic. He was carrying a map under his arm, and he just handed it to Ojdanic as he passed him by. The witness claims the chief of staff then invited him to study the map with him. The dispositions of the VJ and KLA units in a part of Kosovo were marked on the map. On top of the map, it said, Order of the Joint Command of 15 April 1999 for operations in the Rugovo sector. On the basis of the title and the markings on the map, Ojdanic issued the Suggestions to the 3rd Army, the witness claims. At that time, neither Ojdanic nor the witness had any knowledge of the existence of a body called the Joint Command.

The presiding judge then joined in the debate, asking how the chief of the General Staff could have drafted the document on the basis of an order he had not seen, issued by a body he knew nothing of. How is it possible, Judge Bonomy asked, that neither the witness nor Ojdanic had ever thought to ask what the Joint Command was? They had to respond quickly, Curcin said, because the 3rd Army needed to get the instructions for action as soon as possible. There was no time to launch an investigation into this ‘non existent body’. Furthermore, he said, it was not necessary for them to know the contents of the Joint Command order if they wanted to draft the Suggestions, because they could get all the information they needed from the map.

The trial of the six former Serbian political, military and police officials for the crimes in Kosovo in the first half of 1999 will break for a week. Djordje Curcin will thus have to come back to The Hague on 16 October to be cross-examined. Curcin is the second to last witness to be called by Ojdanic’s defense. The accused general will take the stand after him.