GENERAL STAFF: IS IT A COMMAND OR WORKING BODY?

The prosecution contests the claims made by the military expert testifying as General Ojdanic’s defense witness. General Radinovic says that during the war the General Staff, headed by the accused general, was just ’a working body’ of the Supreme Command. It had no power to command the army, he claims 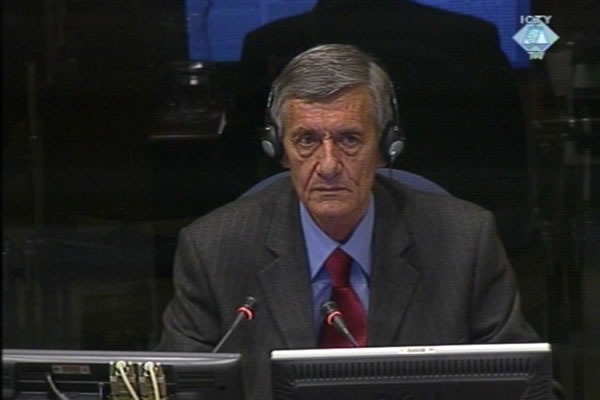 Radovan Radinovic, defense witness for Dragoljub Ojdanic
In the cross-examination retired VJ general Radivoje Radinovic, military expert witness testifying for general Ojdanic’s defense, the prosecution contested his view of the role the accused general played in the war. In his expert report, the witness stated that the General Staff and Ojdanic as its chief were just ’a working body’ of the Supreme Command and not an independent command body with the authority to issue orders to subordinate units as it saw fit. After the state of war was declared, the General Staff became the Supreme Command Staff (SCS).

Prosecutor Chester Stamp confronted the witness with the ’Handbook on Command and Control in the VJ’, where it says that the Chief of Supreme Command Staff ‘commands the armed forces through armies and other subordinate units’. Radinovic disagrees with the authors of this document, saying that they didn’t consistently apply the Constitution and laws. They stipulate that only the supreme commander – Slobodan Milosevic at that time – commands the army, and the Chief of the Supreme Command Staff merely issues orders based on his decisions.

According to the prosecution, Ojdanic’s command role can clearly be seen from the evidence of previous defense witnesses who said that after receiving and analyzing combat reports he would issue orders to the subordinate units without consulting the supreme commander. Radinovic, however, contends that Ojdanic had been in daily contact with Milosevic and that he and his Staff didn’t operate as a separate body. In an organizational chart, he said, the SCS would be placed in the same box as the Supreme Command and the supreme commander, and not below it.

In his attempt to prove the witness’s bias, the prosecutor said that some parts of his expert report could have been written only on the basis of the information obtained from the accused himself. An example is the part that speaks of Ojdanic’s plans and feelings in the course of 1999. Radinovic admitted that he met with the accused general once while working on his report but only to offer his ‘moral support’. They didn’t discuss the war events. He is acquainted with Ojdanic but doesn’t have ‘any special sympathy for him’.

Radinovic will finish his third testimony before the Hague Tribunal tomorrow. He already submitted his expert reports and testified for the defense at the trial of Stanislav Galic, former commander of Sarajevo-Romanija Corps, and Radislav Krstic, former VRS Drina Corps commander. Galic was sentenced to life and Krstic serves 35 years in prison.