PROCLAMATION IN A WRONG LANGUAGE

Ojdanic’s defense witness Branko Krga claims that when the General Staff issued a proclamation to the Albanians urging them not to leave Kosovo. It showed ‘a sincere intent of the Army to prevent the exodus of the refugees’, the witness said. The prosecutor refutes that, noting that the proclamation was issued only in Serbian 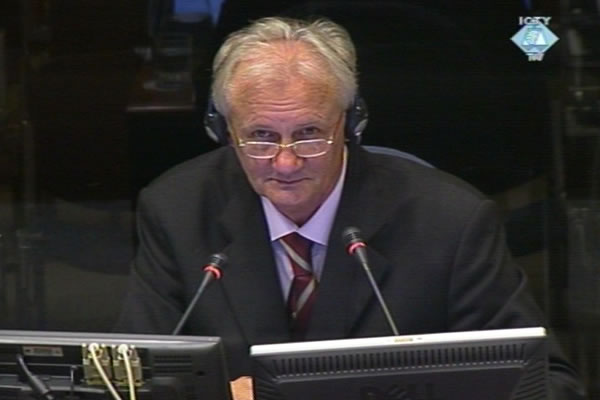 Branko Krga, defense witness for Dragoljub Ojdanic
At the Kosovo Six trial today, retired general Branko Krga admitted in the cross-examination that the Intelligence Administration in the VJ General Staff had learned from the reports in foreign media about hundreds of thousands of Albanian refugees leaving Kosovo in April and May 1999. Although the media reported that the civilians were being expelled by the Serbian security forces, the witness denied that the army was responsible. There were plans in place to set up military points to help those people, he said, although he couldn’t be sure the plans were actually put in action.

One of the things the military did to prevent the refugee exodus, Krga claims, was to publish a proclamation in which the General Staff urged the Albanians to remain in their homes. The prosecutor wanted to know if there was any evidence that the appeal had reached those it was meant for. How could they read it at all if it was published only in Serbian, he asked. Krga agreed that the proclamation should have been published in Albanian too, saying he didn’t know for sure if the paper was distributed to the people in Kosovo. The only thing he was sure of was that the proclamation was read out on Serbian state TV during the war.

In an effort to prove that the movements of the Albanian population from Kosovo were part of a broader plan, but on the part of NATO, not the military, Krga claimed in his examination-in-chief that as early as in February 1999 his Administration had information from sources close to the Italian government that NATO was planning facilities to take care of hundreds of thousands of refugees in Albania and Macedonia. Today he agreed with the prosecutor that intelligence had to be taken with a grain of salt, because the other side could have been spreading misinformation in order to mislead the enemy.

The prosecutor claims Krga presented one such piece of misinformation during the air strikes at a briefing in the General Staff. The Intelligence Administration had received reports, he said, that NATO airplanes were being painted over in Croatia to make them look like VJ airplanes. Krga claimed at the time that those planes were to be used to attack Albanian civilians in Kosovo. Those attacks would then be blamed on the Serbian side. Although he did say that many things happened in war, the witness admitted that this was misinformation his administration had.

As most of the defense witnesses before him, Krga denied the existence of a joint command for the military and police in Kosovo, saying that it was possible that a body coordinating the operation of the armed forces may have existed. He didn’t agree with the testimony of some of Ojdanic’s defense witnesses who claimed that the wartime Supreme Command consisted of the presidents of the federation and the two republics. This would point to the responsibility of the then Serbian president Milan Milutinovic, who is now in the dock.